Jirapa MCE denies any wrongdoing as pressure mounts for her removal - MyJoyOnline.com

Jirapa MCE denies any wrongdoing as pressure mounts for her removal 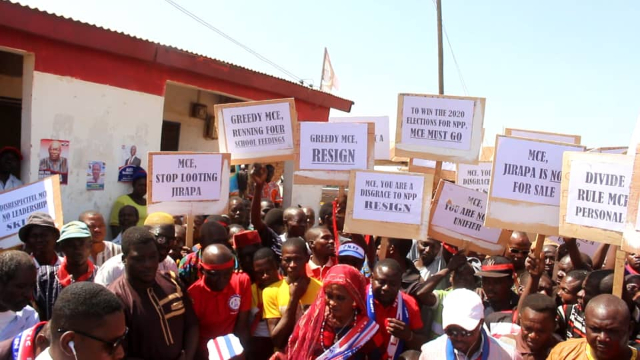 Concerned citizens of Jirapa, a group of New Patriotic Party loyalists based in the Upper West Region has mounted pressure on the government for the removal of their Municipal Chief Executive from office.

They alleged at a street protest that Christine Bombanye, is guilty of procurement breaches and starving her community of the needed development.

”The MCE claimed  she has awarded a contract on the 25th of June, 2017 for the construction of a three-unit classroom block at Mwankuri-Chachaa but no such contract was awarded on that date and yet the MCE made a payment of GHC 169,799.85 in respect of that non-existent contract  without the Assembly’s approval,” Deputy NPP Constituency Secretary,  Collins Tanye read portions of a petition for her removal.

Meanwhile, Jirapa MCE, Christine Bombanye has denied all allegations levelled against her.

”In the first place MMDCES do not award contracts. There is a committee that is in charge of the award of contracts and if they are saying that I have awarded a contract to the NDC Regional Chairman, it is a total lie.

“Whatever I say at his material moment they wouldn’t take it, my wish is that the president and the party should set up a committee to look into the issue, “she added.