Job for the boys: The story of a graduate reduced to a slum dweller and the school dropout 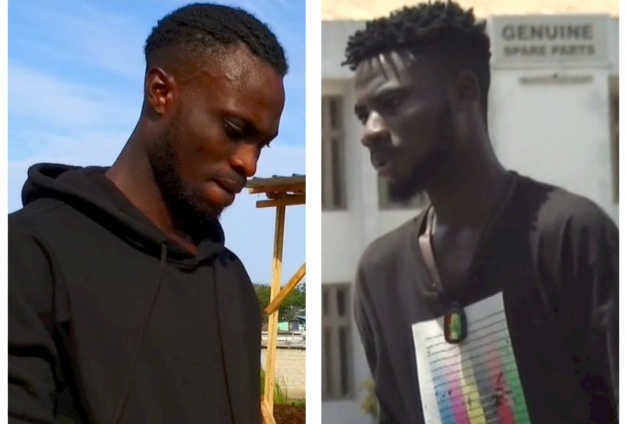 Education, they say, is the key to success and so, for many of the youth in Ghana, going to school offers the key to securing a job.

These young people struggle to gain good grades and apply for internships with the aim to gain experience for the job market.

However, after failing to secure a job years after graduating, unemployment becomes the bane of their existence.

One such individual is 30-year-old Oscar Theophilus Karikari. The young man, who completed his tertiary education in 2017, unfortunately, has never been in long-term employment.

Speaking to JoyNews’ Emmanuel Dzivenu, Oscar noted that he struggled to put himself through school with support from a single mother.

“When I was in SHS, I was owing GHC1,300 and my mum took me to Sheikh I.C. Quaye, he was the one who paid for my tuition in TEMASCO. When I got admission to Accra Poly, for that one I had to work and go to school at the same time.”

While on the academic ladder, he never imagined that the search for a job in a resource-rich country will be a daunting task.

Oscar said he was hoping that educating himself will help him secure a job after the sacrifices his family made to see him through school.

But after years of searching, the young man said the process of constantly applying for jobs only to hear nothing from the prospective employers is not only stressful but depressing.

“I have tried many possibilities, sending my CVs to institutions, some too I send them online and I don’t get any reply from them, so, I have to just hustle. I have to find ways and means to eat. Sometimes I have to starve and sleep hoping that the next day I might get fed, sometimes I drink only water,” Oscar added.

Prior to the Covid-19 pandemic, the graduate said he worked for a factory as a machine operator. But he was laid off after the outbreak alongside other workers.

Oscar lives at Konkomba Borla Top, a growing slum in the Greater Accra Region of Ghana. He is pushed to the edge of society to slum it hard in this shantytown. He and his cousin survive by cleaning silver jewellery for a paltry sum of money.

But Oscar says “that is how we benefit. When we get a customer, we wash one chain for GHC10 or GHC5. We feed on that – hand to mouth.”

The graduate said that he can no longer depend on his mother to feed him because she is also saddled with the responsibility of taking care of two other kids.

Just like other slum dwellers here, a three-square meal is simply a luxury to Oscar.

He told JoyNews that many of the people who live in the slum are talented and smart, but they are misjudged because of their abode and some of them have been held back by unfortunate incidents in life.

But Oscar is not the only person struggling to make ends meet in this slum.

Unlike Oscar who was able to complete tertiary institution, 23-year-old Razak is a school dropout.

He was unable to seek education because his parents were unable to sponsor him through school.

In his bid to survive in a tough world, Razak travelled from his village in the Ashanti Region to seek a future in sandals making in Accra. Razak said that he felt it would be better to hustle than stay idle.

He told JoyNews the business of sandals making was beneficial for a while but the infiltration of foreign goods is threatening to put him and others out of the trade.

Razak said the importation is so high customers now doubt if his products are truly made in Ghana.

He noted that aside from that the prices of the raw materials used in making the sandals have increased significantly which affects the cost of the goods.

Razak noted that now he barely gets any profit from selling a single product and is hoping to get other streams of revenue to support himself.

Statistics revealed from the Labour Force Survey conducted by the Ghana Statistical Service in 2015 and launched in 2017 indicate that the rate of unemployment as at the end of 2015 is pegged at 11.9% of the Labour Force.

It shows that whilst 25.9% of the unemployed are youth, about 11.7% of the employed population are under-employed.

Unemployment remains a global issue confronting both developed and developing countries. It has been found to be closely related to a lack of adequate education.

Due to the rising levels of unemployment in the country, many of the young people continue to risk their lives on perilous journeys across the Sahara desert to Europe. Others continue to participate in the American DV Visa lottery.

The Director of the Centre for Social Policy Studies (CSPS) and a Senior Research Fellow with the Institute of Statistical, Social and Economic Research (ISSER), Dr. Nana Akua Anyidoho, believes many policies introduced by successive governments have failed to address unemployment challenges due to their politicization.

“If a large segment of the working population is unemployed or under-employed, then young people are competing with older people for jobs,” she said.

Dr. Anyidoho added that “so you need to fix the larger economy to make sure that it is producing jobs generally. You can’t produce jobs just for young people, it doesn’t work that way.”

Meanwhile, many analysts have described Ghana’s unemployment figures as a threat to national security.

Something has to change. This nation needs a revolution, not with guns or violence but a revolution of ideas, a certain sense of anger that will change the way governments manage the resources of the state.

DISCLAIMER: The Views, Comments, Opinions, Contributions and Statements made by Readers and Contributors on this platform do not necessarily represent the views or policy of Multimedia Group Limited.
Tags:
Job For The Boys
Unemployment
Unemployment in Ghana