Joshua Alabi calls for transparency in the award of govt scholarships 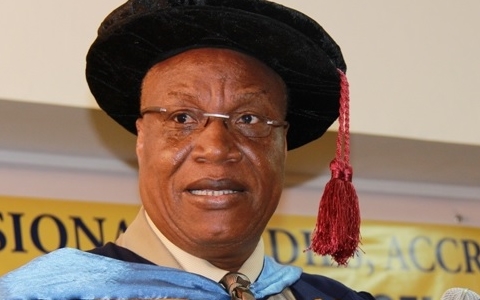 The former Vice-Chancellor of the University of Professional Studies, Accra, (UPSA), Prof Joshua Alabi has called for community-based participation in the award of government scholarships, so as to help target and support the education of brilliant but needy students in deprived farming communities.

He is of the view that such community participation, through the involvement of traditional authorities, will help whip up the interest of farmers in education, especially tertiary education, and therefore produce the next generation of children of farmers who will become icons in their communities and give the needed attention to farming.

"If I had my own way, I will recommend that part of the GETFUND should be set aside, and allocated as pre-determined scholarship scheme, targeting such communities in each constituency, with a focus on relatively deprived communities.
In this case, to get traditional leaders actively involved in the education of their people, they will have to present their list of nominees from their communities. And in order to ensure transparency of the selection process, a defined committee structure must be put in place," the former Vice-Chancellor said.

Prof Joshua Alabi who is also a former Greater Accra Regional Chairman of the National Democratic Congress (NDC) and a former Minister of State, said this when delivering a keynote address at the Badu Yam Festival, in the Tain District of the Brong Ahafo Region.

Using his life story as a case study, He spurred on the farmers to see education of their children as the catalyst that will transform their farms, improve their quality of lives and also expand trade in the Badu township.

"For example, one of the things that my father who was uneducated, who was a common mechanic and a farmer did, was to try and give me the best of education. Though we worked on the farm with him, he made sure we all went to school. Today, the education we received has made a lot of difference, not only for me but for my community and the entire country. Yes, the son of that uneducated farmer is today a retired Vice Chancellor and acknowledged for his transformational leadership. The son of that uneducated man is a former Member of Parliament and a former Minister of State, milestones that He personally couldn't achieve, so He prepared me to achieve.

You may be an uneducated farmer, but if you give your son or daughter a good education, he or she will be successful in life, will become an asset to this nation and will come back here to help transform Badu into a small town of rich farmers."

Speaking in English and Akan languages, Prof Alabi recollected the era of bumper harvests in the 1970s and demanded for the reintroduction of such farmer friendly policies.

He fondly recollected life in the farm of his father who was based in Tamale. "He had about 2,000 acres of rice farm, with about nine tractors and two combined harvesters. Helicopters were used to spray our farm. Whenever we harvested our rice, we sold to rice millers. All these activities in the rice industry, generated employment. There was ready market for the rice, so, many were encouraged to enter into farming. The banks and extension officers were always on standby to ensure that the right things were done. This was why people were drifting to the northern parts of the country. This was possible because Agric Extension Officers did their work so well to help achieve the policy targets. The banks boldly invested in farmers knowing there were guaranteed prices and the irrigation mechanisms assured them of good yields. This was as a result of proper and relevant agric education and policy direction backed with total commitment.

As a people, we need to ask ourselves some serious questions. How did we lose some of these opportunities, which has forced our youth to abandon school in search of better lives through menial jobs? We have to go back to those policies and systems which worked for us. We need the good old days back. We can not allow few unscrupulous people to destroy the many advantages we have in farming. As a nation, we cannot abandon our first love because those few extension officers failed to do their work properly."

Professor Alabi further asked that the country refocuses its education and make it relevant to farming communities and their needs. He was of the view that since the majority of the population are farmers living in such communities, it will be important for the government to invest in farming and the accompanied value chain, through proper training of extension officers and deploying as many as possible to help manage the largely uneducated farmers. This he envisages will help expand opportunities in farming, and be able to boost the productivity of farmers and transform farming communities, towns and villages.

"As a country with a competitive advantage in farming, greater aspect of our education system must be tailored towards providing the needed know-how and support services to agriculture," He summed up.

Explaining the value chain of such investment, it was his view that, farmers recording bumper harvests will have an increased purchasing power, they will demand goods and services to improve their living conditions, which producers and traders will readily supply, the once farming community will thus attract such producers and traders, consequently leading to an increase in the exchange of goods and services and quality of life.

"The farmers will demand for television sets, fans, refrigerators, barbering and hair dressing services, and so on and so forth. The producers of these goods and services will locate these farmers and settle in such farming communities in order to help sell to the farmers. The investment made into agriculture has therefore resulted in such rippling effects, and this is what I'm trying to draw attention to", He told the media after delivering his speech.