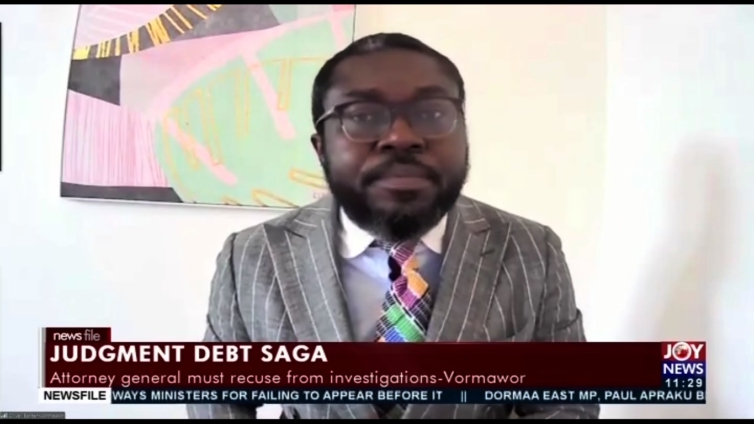 Researcher at the University of Cambridge Faculty of Law, Mawuse Oliver Barker-Vormawor has alleged that judgement debts are becoming a constitutionalised money laundering avenue in Ghana.

He believes that the lack of required seriousness attached to dealing with international arbitral claims has deprived the state of resources that could have been channeled into developmental projects.

Speaking to Samson Lardy Anyenini, host of JoyNews‘ Newsfile, Saturday, Mr Barker-Vormawor alleged that the phenomenon has become an entrenched framework used by public actors to deliberately defraud the state of huge amounts of money.

He bemoaned the failure of the state to institute protocols and mechanisms to avert paying avoidable debts. The situation, according to him, if not checked, will plunge Ghana into serious financial crisis.

“Judgement debts are becoming constitutionalised money laundering avenues because it is the only thing where once the award is given, there is no way it can be challenged. It becomes clean money. For people to be using this as a framework to defraud the state intentionally. This is something that we need to talk about. It is something that Justice Appau’s report aims at,” he said.

Mr. Barker-Vormawor’s comment comes after a London-based United Nations Commission on International Trade Law Tribunal issued its final award, ordering the government of Ghana to pay a whopping $170 million in damages to Ghana Power Generation Company (GPGC) for failing to meet set deadlines in contesting unlawful termination of a contract between the two parties.

The Cambridge Law Researcher also raised concerns about the government’s reliance on foreign law firms that are detached from historical facts of the case in question and may not be in a better position to proffer cogent advice.

He proposed training of local lawyers, especially at the Attorney General’s Department so they can handle international arbitrations.

“I do think that this particular issue that is happening now is also related to failure to professionalise even international arbitration at the AG’s office. So everything dealing with the international, we tend to turn to scavengers and foreign law firms parachuting in to make millions of dollars at the expense of an impoverished Attorney General’s Department”

The Cambridge scholar also raised issues with institutional documentations. He alleged that government officials, including their foreign partners involved in the GPGC arbitration, used their private email addresses to receive public correspondents.

Mr. Barker-Vormawor called on the Attorney-General, Godfred Yeboah Dame to take steps to put in place measures to reduce the number of judgement debts awarded against the state.

DISCLAIMER: The Views, Comments, Opinions, Contributions and Statements made by Readers and Contributors on this platform do not necessarily represent the views or policy of Multimedia Group Limited.
Tags:
$170m Judgment Debt
Mawuse Oliver Barker-Vormawor
Newsfile