Judges who fail to wear wig and gown will be sanctioned - Chief Justice - MyJoyOnline.com 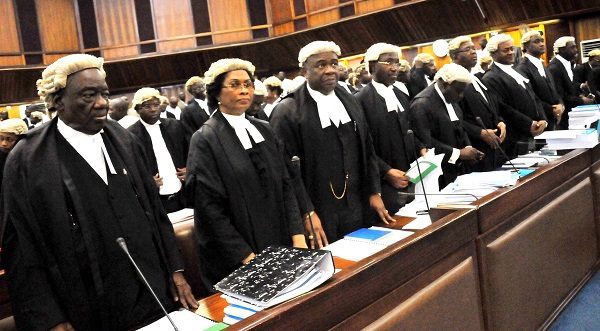 Chief Justice Anin Yeboah has warned that sanctions will be imposed on judges and professional magistrates who fail to comply with stated dress standards.

“Judges and professional magistrates must be fully robed in wig and gown for court sittings at all times,” a circular signed by the Chief Justice stated.

The circular indicates that the CJ had become aware that certain Judges and Professional Magistrates were not complying with the dress code.

The circular provides the dress standards as follows;

Collars held with studs and stiffeners

“It concludes; I re-iterate that dressing in this manner helps to preserve the decorum, seriousness, and formality of court proceedings and the importance of the proper administration of justice.”

“For this reason, judges and professional magistrates should also ensure that members of the Bar who appear before the Courts strictly comply with the dress standards to maintain the dignity of the court. I trust that I can count on your unalloyed cooperation.”

The wearing of wigs remains a thorny issue in the legal profession, with some respected legal brains publicly describing the practice as a relic of colonialism.

Others say there is no scientific basis for the claim that it assists the administration of justice in any way.