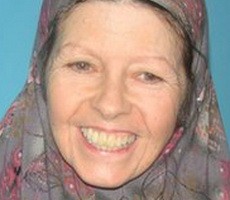 A Briton seized in a raid in Kenya, in which her husband was killed, has been freed after six months held in Somalia.

Judith Tebbutt, 56, is being flown to Nairobi after a ransom, raised by her relatives, was paid for her release.

As she left Adado in Somalia, Mrs Tebbutt, from Bishop’s Stortford, Hertfordshire, smiled and told reporters she was glad to be safe.

Her husband David, 58, was shot by a gang of six men at their remote holiday resort in Kiwayu, north of Lamu island.

Mrs Tebbutt, a social worker, who is believed to be deaf and was wearing a double hearing aid, spoke to reporters before boarding a flight to the Kenyan capital from Adado.

In Nairobi, she will be looked after by officials from the British embassy before being flown back to the UK to be reunited with friends and relatives.

Mrs Tebbutt was seized on 11 September last year from Kiwayu Safari Village, a luxury resort on a deserted stretch of Kenyan coastline, comprised of thatched cottages on the beach.

The couple had arrived only the previous day and were the only guests.

She was taken away in a speedboat, possibly by Somali pirates, after Mr Tebbutt had been killed.

He said it was unclear how much money was involved, and revealing the amount was generally discouraged to avoid copy-cat gangs.

Paying the ransom was not illegal because it was not known to be going to a terrorist organisation, he added.

“She will now become the key witness in the on-going murder investigation of her husband David,” our correspondent said.

East Africa correspondent Will Ross in Nairobi said the ransom was paid in the last three days.

“The British government does not pay ransoms, it’s against the idea, but it certainly doesn’t seem to have stood in the way of the family to secure Judith Tebbutt’s release,” he said.

Police in Kenya said six gunmen had burst into their room and officers speculated that Mr Tebbutt may have tried to resist the gang.

He worked in publishing and sat on the board of a book charity.

British police officers were sent to Kenya to help with the investigation.

The Somali government, which controls only the capital, Mogadishu, and a few other areas, said at the time that it believed the al-Qaeda-linked al-Shabab group was behind the murder and kidnap.

The group itself denied the claims.

Last year, two men appeared in court in connection with the attack, with both denying the charges.

One of them, Ali Babitu Kololo, told the court he had been forced at gunpoint to lead a group of men to the hotel and had not been a willing accomplice.