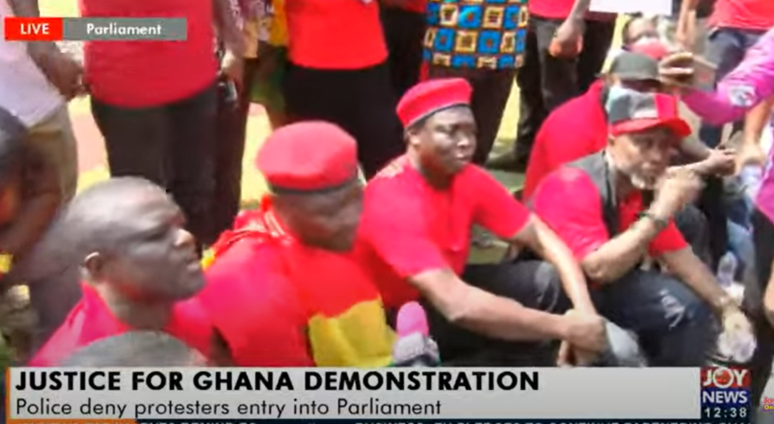 Members of ‘Justice for Ghana’ have presented their petition to Parliament after they declined to do so at the entrance.

The Group demanded to present the petition on the forecourt of Parliament but were denied the opportunity by the Police.

Eventually, the petition was received by the two Deputy Chief Whips, Lydia Seyram Alhassan and Ibrahim Ahmed on behalf of the leadership of Parliament on the forecourt as requested by the protesters.

Speaking on Top Story, Majority Chief Whip, Frank Annoh Dompreh noted that the petition will be tabled on the floor of the House.

“It’s been received, it will be handed over to go through the process and we will take it from there,” he said.

Earlier on Wednesday, December 8, 2021, the Police prevented the group from entering into the premises of Parliament to present their petition to the leadership.

According to the Police, an injunction was secured from the High court to restrain the protesters from doing so.

“The Police are not against their demonstration because it is their right. Our concern is their intention to occupy Parliament that is the reason why we had to prepare well and then also backed by a court order restraining them from occupying the Parliament. It is their democratic right to demonstrate, it is also our democratic mandate to protect Parliament and any other strategic institution,” Accra Regional Police Commander, DCOP Iddi Seidu told JoyNews.

The action by the Police created confusion as the group refused to cooperate.

Convener of Justice for Ghana, Bernard Monarh said the act by the Police is an affront to their dignity as citizens. “We want to go to the forecourt of Parliament to present our petition. Why have you not asked the Police why they have decided to do what they are doing here?  Our rights are being trampled upon, our right to meet our leadership is not granted.

We are Ghanaians, we are Africans and we deserve dignity. We did not achieve independence on a silver platter and as for e-levy independence, we will get it,” he said.