Juventus star Ronaldo named Serie A player of the year 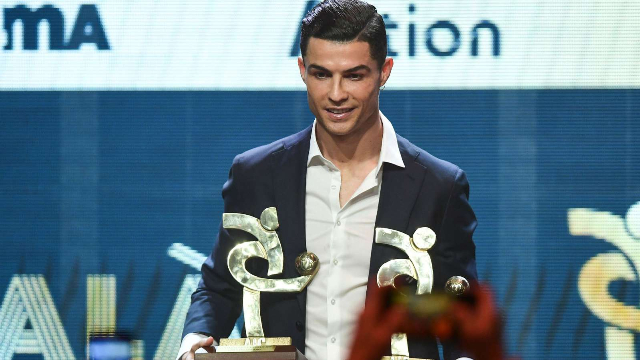 The Portugal international scored 26 goals in his debut season in Italy and helped Juventus towards another domestic title.

In the league, he scored 21 times in 31 appearances, finishing fourth in the top-scoring charts, with veteran striker Fabio Quagliarella of Sampdoria collecting the golden boot award.

A jury comprising of fellow Serie A players, coaches, referees, journalists, and current and former technical commissioners all agreed that Ronaldo was the league’s best last season.

The Italian title was the third different league crown of Ronaldo’s career, having also won La Liga with Real Madrid and the Premier League with Manchester United.

Juventus’ quest to win the league yet again this season isn’t going as well as planned, however, with Inter currently a point above them at the summit of the table.

Ronaldo has managed six goals in his 11 Serie A appearances this term and will be expected to propel his side to another league title and possibly victory in the Champions League.

Away from Juventus, Ronaldo has been in fine form for Portugal, winning his second international trophy with his national team in the Nations League, and recently moved onto 99 goals for his country.

Only one player – Ali Daei of Iran – has ever scored a century of goals for their nation, and Ronaldo looks set to join the exclusive club in the new year.

The Juventus forward was absent from the Ballon d’Or ceremony as he claimed his prize, finishing third in the voting of that particular gong, behind Virgil van Dijk in second and Lionel Messi in first.

Ronaldo had been tied with Messi on five Ballons d’Or after claiming his fifth award in 2017, but the Argentine has set a new record, moving ahead of him with six.