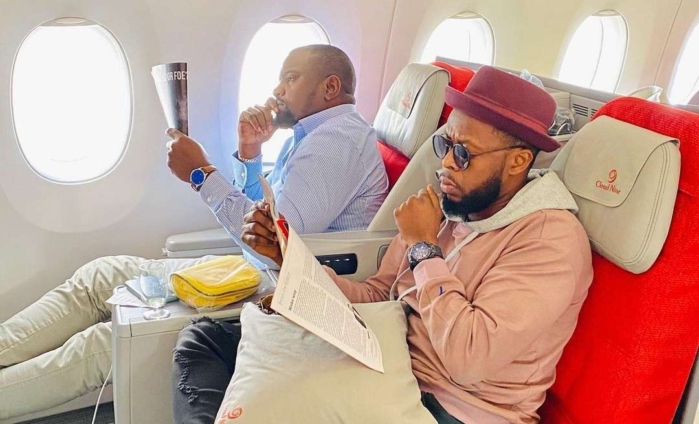 Actor Kalybos says he and actor turned politician John Dumelo have no bad blood between them.

His comment comes after he and other colleagues faced backlash for supporting the NPP Parliamentary candidate for Ayawaso West Wuogon, Lydia Alhassan instead of their colleague who is also vying for the same seat.

In a lengthy post on social media, Kalybos stated that people are allowed to make their own choices and decisions, especially in a democratic country.

“For your information, John Dumelo and I are very cool and we are not determined enemies so stop creating room for that because he knows what democracy and friendship is,” he wrote.

Kalybos stated that some of his colleagues only claimed to show support for John Dumelo after he and others went to campaign for the NPP.

“The hypocrisy in some of us so called friends are overwhelmingly surprising,” he added.

The actor added that he will always be John Dumelo’s friend but will not campaign for him adding “you’re on the other side.”

A letter to all Fellow Ghanaians. I think it’s about time our school system starts to teach us what democracy is and what opinions are.

We’re all made individually to make different choices and that doesn’t mean an opinion of ‘A’ is an enemy to ‘B’.

We tend to forget the rules of Life and Living It and rather make enemies for ourselves we never wanted and that breeds what we call HYPOCRITES.

For your information, John Dumelo and I are very cool and we are not determined enemies so stop creating room for that because he knows what democracy and friendship is.

Meaning we disagree to agree based on your opinion. Myself with some colleagues went to Ayawaso West Wagon, Ablekuma North and James Town to campaign for our beloved Party NPP and our President Nana Addo Dankwa Akufo-Addo.

Why campaign AGAINST while you can actually campaign FOR. It’s two different energy. One talks of Good and the other breeds Evil.

However, the hypocrisy in some of us so called friends are overwhelmingly surprising. A wake up call came for those who chant #idey4u for John Dumelo who are supposed friends and colleagues of John but have never posted or shown support towards his campaign until KALYBOS and Co went to show support for their party NPP.

Now we are seeing people posting John, writing essays with BIG grammar as if they attended Montessori exhibiting their hypocrisy while we the ‘Sytocians’ did what we believe in.

Hmm asem ooo, just be real to yourself and others.

Well I am glad I was about to divulge the pretenders who wouldn’t do anything but will say everything.

God is watching your buttocks. To @johndumelo1 I wish you all the best in this election and always know #idey4u but you’re in the other side.

James Gardiner also took to his Instagram account to write an open letter to his friend John Dumelo ahead of the elections.