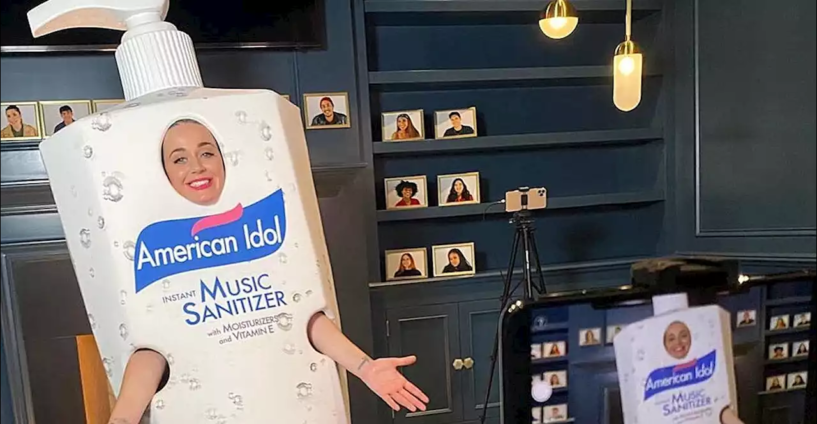 American Idol returned on Sunday with a new remote episode, and Katy Perry decided to celebrate the episode with a fun, weird costume choice.

The new remote Idol — which featured the Top 20 performing from their homes as Perry and fellow judges Lionel Richie and Luke Bryan watched remotely from their own living rooms — was an impressive feat of creative problem solving on behalf of the show’s producers amid the coronavirus outbreak.

To commemorate the quarantine-necessitated remote episode, and to remind people to keep their hands clean, Perry dressed up like a giant bottle of American Idol-brand hand sanitizer.

“I just want to make sure that American Idol is staying as safe as possible,” Perry told host Ryan Seacrest at the start of the show.

Seacrest also used the chance to catch up with Perry, and see how her pregnancy journey has been since she’s been self-isolating.

“I’m doing well. Thank you. When I look back at this time, it will be a time I never forget,” Perry said. “My first pregnancy, in a pandemic, having cravings that I can’t necessarily fill if I want to.”

Perry admitted, however, that there are still “a lot of things I’m grateful for these days.” One of which is apparently getting to give real music advice to the remaining Idol hopefuls while decked out in a hilariously weird custom-made costume.

Before the show kicked off, Seacrest asked outright if Perry wanted to “debottle,” assuming it would just be a sight gag, but the songstress had no intention of taking it off, responding excitedly, “Nope, I’m full up!”

In the opening minutes of the episode, Seacrest also introduced the new format and explained, “This is our show like you’ve never seen it before, but one thing stays the same: you vote, you decide.”

“With stay-at-home orders across Los Angeles, like many productions, we’ve had to shift the way we made our show,” Seacrest continued. “Idol has the history of making the most of the newest technology, so we were determined to make this work, not only for you, but for the Top 20.”

As he was joined remotely by the judges, Richie was almost gleeful with the opportunities presented by the new format.

“First of all, let me just say, this is probably the most excited I’ve been in a very long time,” Lionel Richie shared. “Because I can actually say I have never done this before in my entire career.”

He also explained how, having to set up their own shoots with limited gear, from their own homes, is going to really give the contestants a chance to show off their raw talent.

“These artists are now going to get the best test ever, because without all the lights, without all the glitter and glamour, they’re going to have to understand that you bring your light to the table. Your personality. Not only your voice, but everything else that goes with it,” Richie explained. “This has never been done before, where we’re judging people from afar. And I’m sure the kids we have on American Idol are going to rise to the occasion. I’m so excited about this.”

Before the episode kicked off, Perry spoke with fans in a Facebook Live chat, and dished on how the American Idol producers tried to make sure every contestant had a fair shot at showcasing their voices.

Additionally, Perry teased her own goofy costume — which she also debuted on Instagram — explaining, “I really put some thought into my outfit.”

We at #AmericanIdol are keeping it both fresh and CLEAN! Tune in for the first ever episode from our homes tonight at 8/7c on @abcnetwork. It’s up to you to narrow us down to our top 🔟! And I’ll be going live on Facebook at 4:30pm PT / 7:30pm ET so we can catch up before the east coast broadcast! 🤗

“I’ve been dreaming about this outfit for about three weeks, and I had it made,” Perry said. “It’s really stupid, and you know that’s how I like it. It’s kind of like slapstick, like Pee-wee Herman.”

Only time will tell if fans will get to see Perry don other costumes in the future, but it seems American Idol has indeed figured out how keep the show going and make sure a new Idol is crowned.