Keke of Dunsin fame makes a massive return as Sparqlyn 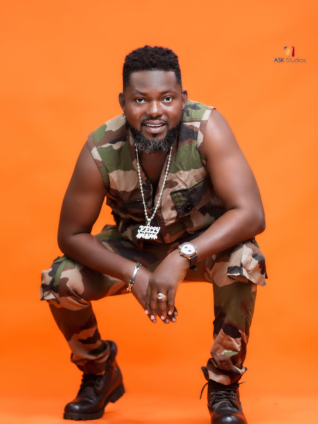 Ahmmed Kanneh Larweh was born on February 2, 1983, in Achimota, in the Greater Accra Region of Ghana.

He got his Nursery, Primary, and Junior High School education at the Rives Academy International School located at Achimota, Accra.

Ahmed completed his Junior High School (JHS) education in 1998 and moved to the Ashanti Region to continue his education at the Asanteman Secondary School located at Suami and completed in 2001.

Ahmmed was tipped by many of the people who knew him when he was just a young boy as one destined to make music when he started performing during his school’s speech and prize-giving days when he was in class 4.

The signs that many saw while he was just a boy became clearer when he decided to walk the path of music in 2003 after he had completed his Secondary School education.

He has done active music from 2003 till now.

As a musician, he was known as Kele when he was with the music trio, Dunsin – crooners of the hit song ‘Ɔyɛadeɛyie’ back in 2008.

However, after he decided to go solo in 2019 and chart a new path for himself, he chose the stage name Sparqlyn.

Sparqlyn as he is popularly called now is one of the respected people in the music space of Ghana because of the successes he has chalked in the industry for more than a decade.

He is known to be one of Ghana’s finest Hiplife/Hip-hop and Afrobeats artists.

Sparqlyn has rocked many stages in the years. In 2008 he was one of the best performers at Adom FM’s Temafest.

He also performed at the VGMA nominees jam at the Labadi beach back in 2009, he wowed patrons of the show with his spectacular performance.

Sparqlyn also performed at the MTN Valentine Show at the Kumasi Sports Stadium, the Ashaiman to Da World Concert organized by Stonebwoy, Saminifest which is also organized by Samini, Charterhouse’s Audra Carnivals, Kasapreko Festivals Nationwide, The Vita Milk Night with Kwabena Kwabena and many others.

Beyond the borders of Ghana, Sparqlyn has also performed in other African countries. Notable among them are Nigeria and South Africa.

With regards to awards, as part of the Dunsin music group, they got nominated for the Highlife Song of the Year category in 2009 at the prestigious Ghana Music Awards.

Sparqlyn’s contribution to Dunsin at the time also got them a nomination at the 4syte TV Music Video Awards in 2010 for Best Group of The Year, Best Choreography of the Year, and Best Storyline of The Year.

In 2013, when Sparqlyn was still a part of Dunsin, the group also won international awards for the Most Exciting Group in Africa and The Most African Video of The Year.