Ken Agyapong must suffer something more than an apology - Kpebu - MyJoyOnline.com

Ken Agyapong must suffer something more than an apology – Kpebu 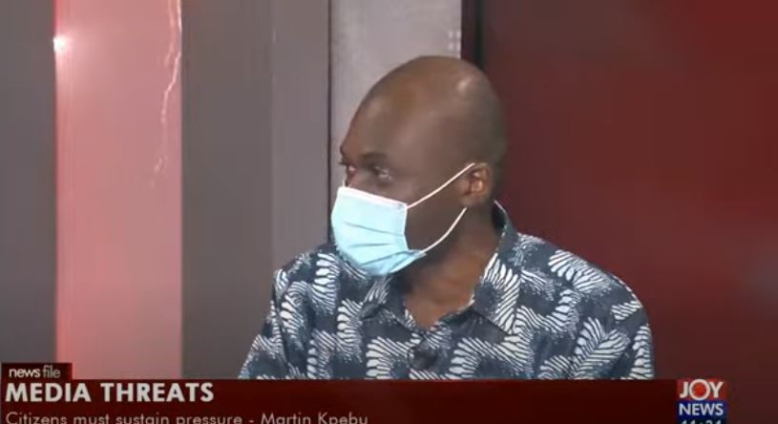 A private legal practitioner says the Member of Parliament (MP) for Assin Central must suffer something more than an apology for inciting attacks against Luv FM journalist, Erastus Asare Donkor.

According to Martin Kpebu, although Ghanaians expect an apology from Kennedy Agyapong for threatening the life of the journalist on a live TV, he believes a conciliatory sentiment from the politician would not be enough.

“You see apology is due the Ghanaian people after everything but he must suffer something more than an apology,” he reiterated.

Mr Kpebu’s comment comes after, Mr Agyapong was on Friday, July 9, reported to have verbally abused and threatened to attack Mr Asare Donkor, “for the journalistic work that the latter undertook during the recent shootings and killing incident at Ejura” on Net 2 TV, a television station owned by the MP.

He was filmed on a live programme which was widely published on social media platforms, stating that, “if he [Mr Agyapong] were President, he would have ensured that Erastus Asare Donkor is beaten mercilessly.”

Following his actions, Mr Kpebu called on Ghanaians to sustain the pressure mounted on the issue of threat.

“Let’s sustain the pressure this time that we want justice this time to the fullest maximum because he can’t continue to take us for a ride and do all this thing as if there are no laws, it’s just one too many,” he said on Joy News’ Newsfile on Saturday.

He added that he expected the politician to have learnt from his past experiences with his utterances which has caused many public attentions.

“It’s just one too many. I mean one would have expected that when he did those his genocide tarring.. When he said on ethnic group should attack the other you know I thought he would have learnt his lessons, he didn’t. From there, he went to Ahmed Suale to the judges,” he said.

Mr Kpebu, further suggested that inciting people to violence or indulging in unacceptable behaviour needs to be considered a crime against humanity.

“Let’s look at how we would make amendments on incitement to violence as part of free speech, being a crime when you incite someone to violence,” he said on Saturday.

Meanwhile, The Tamale North MP, Alhassan Suhuyini believes that even if the Assin Central MP apologises to the affected journalist, it will be up to the Privileges Committee to decide their next line of action and the fate of the MP.

“It will still be left to the committee to decide whether that conduct was a breach of his privilege as a Member of Parliament and (if) it amounted to contempt of Parliament. I still hold the view that even after an apology, the damage done to the image of Parliament, would not have been appropriately cured,” he said.