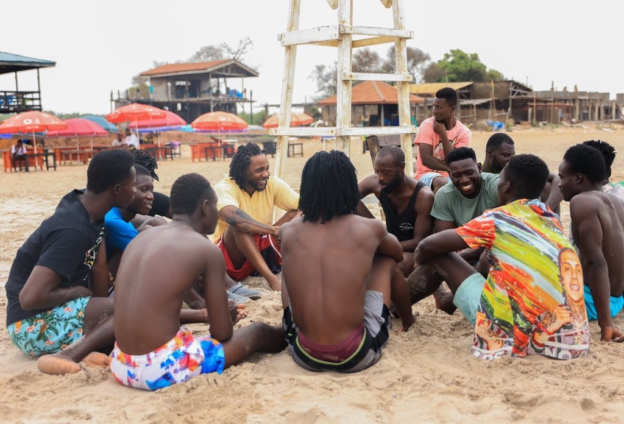 American rapper Kendrick Lamar seems to be exploring Accra as much as he can during his visit to Ghana.

Kendrick Lamar was first spotted at Kozo Restaurant on Thursday, a night before his new album Mr. Morale & The Big Steppers was released.

Over the weekend, the rapper was spotted at the Freedom Skate Park.

He was also seen playing football with some kids at Jamestown.

When rumours of his presence in Ghana went viral, it was reported that Lamar was in town to shoot a documentary.

The rapper later on Saturday evening held an album listening session with some music executives and invited over some Ghanaian artistes.

Black Sherif, Stonebwoy, Amaarae and Smallgod are some of the artistes that were seen with Kendrick on the night.

Love to everyone that came out to celebrate @kendricklamar in Ghana at our #MrMoraleAndTheBigSteppers party last night 💚 pic.twitter.com/wzYe0fNzhh

He was also seen at the private members club Front and Back in Accra.

More visuals of Kendrick Lamar, his fiancée, Whitney Alford and others enjoying the Accra nightlife in 🇬🇭 Ghana. Album barely 2 hours away tho. All the fire dey @FrontBackAccra atm.

We’ll feast when it drops regardless.🔥 pic.twitter.com/sjtiMrszyH

Meanwhile, Kendrick Lamar has launched a new campaign to spread his presence in Ghana and promote his new album ‘Mr. Morale & The Big Steppers’.

The titles of his songs have been plastered on some trotro vehicles across the city.

Read about the campaign here.