Kenneth Awotwe Darko: 'I made a career out of telling stories of my pain' - Why Omar Sterling's album was worth the wait - MyJoyOnline.com

Kenneth Awotwe Darko: ‘I made a career out of telling stories of my pain’ – Why Omar Sterling’s album was worth the wait 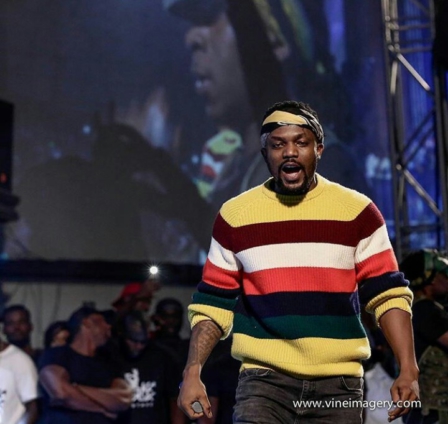 Last week, I chanced on Yaa Pono’s ‘Good Morning,’ a song that is nearly a decade old. Now that I reflect on it, it might just be a classic-in-waiting.

I tweeted that day about how I nearly forgot about this melody which underpinned most of my time back in senior high school, merely because I saw myself in the lyrics.

I almost forgot how special this song feels. Those were some Good mornings. @PonoBiom‘s second verse is golden plus Efya’s vocals.. Gad!

Even more profound was the Efya’s vocals that sandwiched Pono’s witty style from both ends to keep the track airtight, just the way we liked it. It led me to wonder which other rap song was bodied by the songstress at that time when she had just found her feet as a solo act, away from the former Irene and Jane group.

“I’m coming through, see my shining…,” that’s the Efya’s lyrics that rang in my head as it signed out Paedae’s Tema Motorway Freestyle. The 2011 masterpiece was key among songs that ran through my mind.

Efya did her magic on there as well, but this time, with one part of the R2Bees crew, Omar Sterling also known as Paedae.

At that point, it hit me how long we had gone without a Paedae album. His most recent album after that was back in 2016, 5 long years ago.

Remember, this was just me deep in my thoughts on a graveyard shift fighting to keep sleep away as much as I could by reminiscing about songs that struck a nerve for me back in the day – don’t ask me why I wasn’t thinking about today’s crop of music, that’s a story for another day.

Sixteen hours later, an announcement had been made and social media had gone crazy.

“Same Earth Different Worlds available everywhere 22/06. See you next week,” Paedae posted on Twitter and I was poised to wait for that ‘next week’.

However, not all music fanatics were as enthused by the development. As far as announcements go, Paedae had earned notoriety in postponements and here’s why.

In August last year, a similar statement which raised the hopes of his fans left them hanging dry after the September deadline passed without even as much as a whistling sound from the R2Bees posterboy.

Just a reminder. I can’t believe you man 😂😂 pic.twitter.com/HUtDh5CA4l

And so when Omar, known outside music circles as Faisal Hakeem tweeted the release with a definitive date, June 22, fans finally had something to hold him to.

The day came, and Paedae actually dropped the flow! Or the album in this case. He showed us why it was titled Same Earth Different Worlds.

The project has taken the music scene by storm as Paedae’s worldview seems to have evolved over time.

The 20-track album has been his best work yet, I believe. If there’s one thing Omar Sterling is good at, it’s the ability to sell you a packaged version of what you have always known to be true.

You see. Omar Sterling’s music’s value is in the things he makes you think about. Not necessarily his flow nor his literary skill. I think that’s what makes him special because you need to know what exactly to pay attention to before you can enjoy his work.

He has a way to this, narrating his experiences to reflect yours by basically putting a mirror to your face.

Omar Sterling does this on Bayla Boys Company, the second track on the project, where he plays on nostalgia about events from back in his youth.

He walks his audience through adventures, mostly risky, and friends which he dabbled in while growing up as a child. Some of these friends are no more but it is clear from his point of view that he wishes the lost ones would be here to appreciate who he has moved on to become.

This song is a personal one with an emotional twist that many hard knock streets kids from predominately low-income areas of Ghana can relate with.

It goes ahead to recount the tragic death of Mugeez’s sister, (Paedae’s cousin) which he says brought untold grief to the family until he learnt from the Quran that innocent souls go to Heaven.

He adopts a similar approach on ‘I’m Back’ as if to reflect the listener’s flaws by merely pointing out his own, in a melodic manner.

His skill as communicator by dissemination his message and ideals learnt in life gives him an edge above the others, one of the reasons his audience had the bandwidth to wait for about 5 years for this album to drop.

Consistency is key in order for musicians to stay relevant, especially in Ghana. The audience here moves on pretty quick if you’re not regularly churning out content to keep the insatiable appetites fed.

But, for some reason, Omar Sterling does not play by these rules, and yet makes good numbers once his work is out.

What exactly in Paedae’s projects gives him an uptick in value despite going years without an album? I think it’s the same principle that keeps J. Cole relevant.

Let’s be honest, the Tema-based rapper’s style, coupled with his gestures and mannerisms give off a J. Cole vibe.

He even pays respect to the Dreamville rapper on his track, ‘Dope Emcees’ alongside greats such as Nas and Lord Kenya.

Like Jermaine Cole, Omar Sterling barely tweets, he is barely in the public eye unless he really wants to make a statement, and as we have come to know, makes music outside the trends and sticks to the path.

He seems to aggregate the scarcity of conscience-pricking songs in the system, then plays it to his advantage by quantifying and converting that vacuum into a never-ending craving for his type of commodity, just like Cole.

Omar Sterling Is Good But his Style of Rap is Boring 😬 That’s de same thing they said about J.Cole and he Speed Up on His New Release And See de Out Come , u can vibe with it anywhere ,, U can listen to #SameEarthDifferentWorld In Your Room only 😊

The closest juxtaposition of these two is clear in the song ‘Could Haves.’ Aside from the confidence to take on an instrumentation that is experimental in Ghana, to say the least, Paedae dare to take on values.

“Embrace the struggle, ignore the fame. I made a career out of telling stories of my pain…”

On this session, he speaks of the need to stop dwelling on the past, things which you have no control over while striving for the best in the present.

Widely considered as one of Ghana’s richest musicians in an industry dominated by stereotypes of money, fame and pleasures, Omar says he is awake to the realities of life now.

On ‘Could Haves,’ he shares his thoughts about the need to chide materialism by considering the basic necessities of life, cherishing family while placing contentment above riches and even mental health.

“Make money big enough to buy the mall but if [its] at the expense of your sanity then don’t get involved,” he sings in a line.

Society think that you Fail but my bruh No Way.. next year you go Jam , you go Jam oh yeah , omoa bodam you be Man no Fear – Omar Sterling 🔥🔥 18yrs 🔥🔥#SameEarthDifferentWorlds

This is a core theme shared by Same Earth Different Worlds and J. Cole’s recent project, The Off Season.

Omar Sterling is a celebrated figure in the public space and he is well aware of this. It is thereby not surprising that he has developed the art of using his status to help others see the truth.

“We’re out here sharing knowledge,” he says on ‘Wake and Bake Ghetto Girl, a song which showed his changing perspectives on the mission of his music.

Now hear this; “A mountain full of gold, double that will not be enough to satisfy the desires of a single soul…”

Those are the opening lines to my favorite song on the album, ‘A Mountain Full of Gold.’ In fact, the 3-minute song produced by KillBeatz lives rent-free in my head.

I mean who can, in a single song, carry so much life lessons and bars at the same time without enough time to even decipher each line.

“We’re bringing sanity to a world that is tired of the matrix, the false and the hatred… politricksters religious leaders are all liars,” he raps in the concluding lines.

That song is spiritually a whole EP on its own, honestly, and a competent lead song for the project.

‘Solid as a Rock’, is everything you’ll need in an upbeat rap tempo which at the same time talks about perseverance.

It gives you the impression that he is back with new views, fresh direction and perspective, but same vibe.

His much sought-after feature with M.anifest came in the form of Makola Dreams.

On the song, both artistes sing about ambitions and the ability situations to cause people to change the plans just to fit in a harsh climate, leaving no room for the realization of dreams.

After multiple full listens and gauging reactions thereof, I now appreciate why an album of this stature will take this long to come out.

If you don’t like Omar sterling !!! Twene Jonas has a message for you #SameEarthDifferentWorlds pic.twitter.com/Su9VeYhr4V

Considering the plethora of experiences bottled up in this body of work, it could have easily stretched another couple of months in order to get it right.

This Album is a 🥶 🥶 set ! 💯 #SameEarthDifferentWorlds

And oh, did you hear the subtle indication of a possible concert in December?

Keep your fingers crossed then.