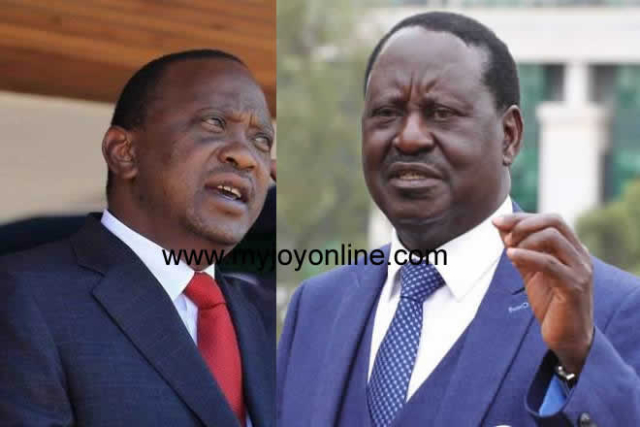 Uhuru Kenyatta and Raila Odinga spoke on national TV after holding their first public meeting since the poll.

About 150 people were killed in the aftermath of the disputed election.

Earlier this year, Mr Odinga swore himself in as the "people's president" and refused to recognise election winner Mr Kenyatta as head of state.

Until now, both had dismissed all calls for talks, from Kenyans and foreign diplomats.

In their joint address, President Kenyatta referred to Mr Odinga as his "brother".

Mr Kenyatta said: "We will begin a process of discussing what ails us and what creates division amongst us."

Mr Odinga said it was "time to resolve our differences".

Resolving the two men's differences won't be so easy. Kenya is sharply divided along ethnic lines because of the political stand-off.

The opposition charges of rigged elections, police brutality and state high-handedness were not mentioned – only a joint call for national dialogue.

The unexpected public appearance comes as US Secretary of State Rex Tillerson visits Kenya as part of his visit to Africa.

In Ethiopia, he criticised the government for declaring a state of emergency. So some see this meeting as a pre-emptive public relations stunt to water down any potential dressing-down; while others have welcomed the announcement as long overdue.

President Kenyatta was sworn in for a second term last November. He won an election re-run in October, which Mr Odinga had boycotted.

Elections were first held in August but the courts ordered a re-run, saying Mr Kenyatta's victory was marred by irregularities.

Mr Odinga said that nothing had been changed before the re-run.