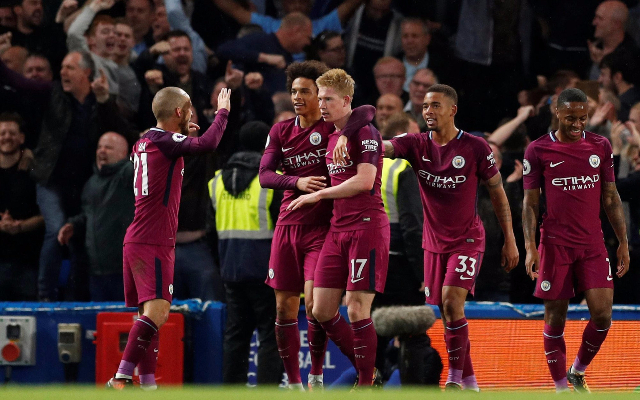 Manchester City lead Manchester United on goal difference at the top of the Premier League after Kevin De Bruyne superbly saw off Chelsea.

Kevin De Bruyne scored the only goal in sublime fashion as Manchester City returned to the top of the Premier League with a deserved 1-0 win over champions Chelsea at Stamford Bridge.

Pep Guardiola's side made it eight consecutive wins in all competitions and dominated for long periods against Chelsea, whose limited attacking intent was further compromised by top scorer Alvaro Morata limping off in the 35th minute with an apparent left hamstring injury.

An exemplary showing from the home defence, in which Andreas Christensen was outstanding, meant City struggled for a regular flow of clear-cut chances despite their superiority.

That was until De Bruyne seized the moment, something his game-breaking goal against Shakhtar Donetsk in midweek demonstrated he is increasingly adept at doing.

The Belgium midfielder collected a return pass from Gabriel Jesus in the 67th minute before unleashing an unerring left-footed finish from outside the area.

The result places City ahead of Manchester United at the summit on goal difference, although their advantage in that regard was slashed to one by Jose Mourinho's men thumping lowly Crystal Palace earlier on Saturday.

Chelsea are fourth, six points off the pace heading into the October international break.