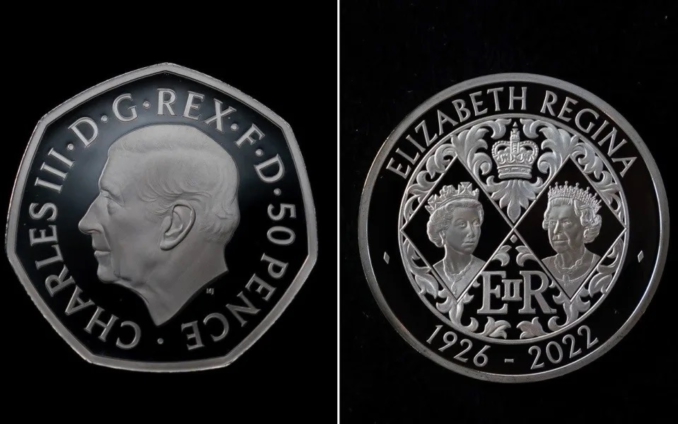 The first portrait of King Charles III to appear on currency was unveiled on Friday as the Royal Mint marks the end of one era and the start of another with its first “double monarch” coin.

The new King’s image, designed to look “more human” than previous official portraits of sovereigns, will appear on commemorative £5 coins and 50p coins in circulation before the end of the year.

They will be joined in the same coin by pictures of the late Queen Elizabeth II in a gentle transition for the public into a new reign.

The King’s effigy has been created by sculptor Martin Jennings, and has been personally approved by him, the Mint said.

The final image was presented to him for approval following the death of his mother and was created from photographs rather than a live sitting.

In keeping with tradition, the King’s portrait faces to the left, the opposite direction to Queen Elizabeth II.

Chris Barker, historian at the Royal Mint Museum, said it was a “very classic coinage portrait”, reminiscent of George V and George VI.

The sculptor, he said, has “managed to achieve a very good likeness”, adding: “It’s very warm with a good sense of humanity – probably more human and less idealised than some of the portraits we’ve seen before.

“It’s both accessible and dignified, reflecting his years of service.

“The King has followed that general tradition that we have in British coinage, going all the way back to Charles II actually, that the monarch faces in the opposite direction to their predecessor.”

The public will start to see the King’s image in their change from December, as 50p coins depicting the King gradually enter circulation to meet demand.

In the meantime, the Mint will release a memorial coin range on Monday October 3 at 9am to commemorate the life and legacy of Queen Elizabeth II.

The King’s portrait will first appear on a special £5 Crown and 50p commemorating the Queen.

The reverse of the commemorative £5 coin features two new portraits of Queen Elizabeth II, one in her younger years and the other “more mature”.

The design was created by artist John Bergdahl in collaboration with the Royal Mint, intended to reflect her long life of service.

It will form part of a wider memorial coin collection.

The reverse of the 50p features a design that originally appeared on the 1953 Coronation Crown.

It includes the four quarters of the Royal Arms depicted within a shield, separated by the emblems of the home nations; a rose, a thistle, a shamrock and a leek.

Based in Llantrisant, South Wales, the Royal Mint has depicted the Royal family on coins for over 1,100 years, documenting each monarch since Alfred the Great.

Mr Jennings said: “It is a privilege to sculpt the first official effigy of His Majesty and to receive his personal approval for the design.

“It is the smallest work I have created, but it is humbling to know it will be seen and held by people around the world for centuries to come.”

There are around 27 billion coins currently circulating in the UK bearing the effigy of Queen Elizabeth II. They will remain legal tender.

From January 1, all new coins will feature the King instead.

Dr Kevin Clancy, director of the Royal Mint Museum, said: “Her Late Majesty Queen Elizabeth II has graced more coins than any other British monarch in a reign that lasted for 70 years.

“As we move from the Elizabethan to the Carolean era it represents the biggest change to Britain’s coinage in decades and the first time that many people will have seen a different effigy.

“Over the coming years it will become common for people to find coins bearing His Majesty and Queen Elizabeth II’s effigy in their change, engaging new generations in the story of Britain’s Royal family.”

DISCLAIMER: The Views, Comments, Opinions, Contributions and Statements made by Readers and Contributors on this platform do not necessarily represent the views or policy of Multimedia Group Limited.
Tags:
King Charles III
New coins
Queen Elizabeth II