KLM is an enduring legacy of Ghana-Netherlands relationship - Dutch Ambassador to Ghana - MyJoyOnline.com 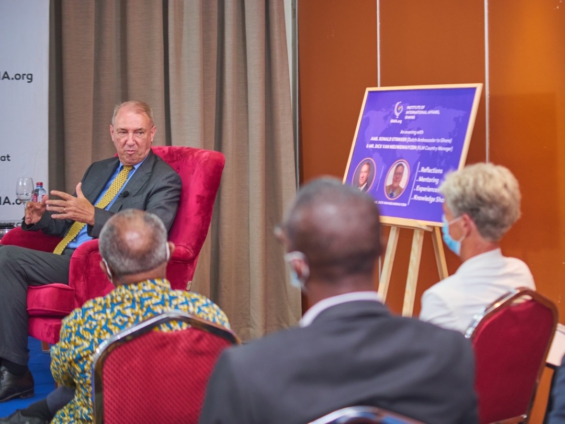 Ambassador Ronald Strikker makes a remark during the event

The Dutch Ambassador to Ghana, His Excellency, Ronald Strikker, has described the Dutch airline giant, KLM, as a remarkable torchbearer of the excellent Ghana-Netherlands diplomatic ties.

He made these remarks during a Fireside Chat series organised by the Institute of International Affairs Ghana to mark 60 years of the footprints of KLM in Ghana.

He disclosed that, his embassy works closely with KLM, as it is a global footmark of the Dutch spirit of enterprise and friendship with the world. “No other event aptly captures the Dutch spirit than the resilience of this airline in the face of the global pandemic.

KLM was probably the only airline still flying despite the challenges of the pandemic”, he remarked. “We did not turn our backs on those who needed it most during this global crisis”, he said.

Reflecting further on his diplomatic experience in Ghana, the Ambassador said the outbreak of Covid-19 in the Dutch embassy in Ghana was the most challenging occurrence in his Ghanaian experience, and it gave him a foretaste, of the nature of the global challenge.

He affirmed his country’s commitment to helping developing countries like Ghana overcome the economic decline caused by the pandemic. He however stressed that a concerted and well-coordinated programme under the auspices of global institutions like the World Bank would prove more effective in this objective.

He further disclosed that policy discussions are underway in his country towards contributing to the global efforts aimed at mitigating the economic impact of the pandemic on the most vulnerable countries.

“Discussions are ongoing in policy spaces for a global effort to address the economic impact of this pandemic on developing countries. My country is committed to lending a hand in this effort”, he assured.

On his part, Country Manager of KLM in Ghana, Mr Dick van Nieuwenhuyzen saluted the exploits of KLM in Ghana, particularly their response to the global pandemic. He narrated the story of the partnership of KLM and Air France that increased the capacity of their operations to be able to continue to serve their clients during the crisis. He described that singular effort as the highlight of his career.

“There were students from other countries who were stranded in Ghana. There were several Ghanaians in France or UK who wanted to come home but were stranded by sudden closure of airspaces in the world,” he recollected.

‘We are proud to have partnered the Government of Ghana to repatriate Ghanaians stranded all over Europe during the pandemic. This included a significant number of students, who were in real distress.

KLM’s partnership with Air France has allowed us to address this precarious situation and save many people from unimaginable inconvenience. This has to stand as the highlight of my career, for sure,” he reiterated.

The forum, organized organised under the theme, “60 years of KLM in Ghana: Ghana and Netherlands growing together” was graced by members of the diplomatic corps, members of the business community and the general public.  It was moderate  by Citi FM’s Apiokor.

The GhIIA Fireside Chat Series is a platform that provides key players in Ghana’s International Affairs landscape an opportunity to share their experiences and reflections on their storied careers with the members of the GhIIA.