Koala supervisor, three others arrested in a botched robbery 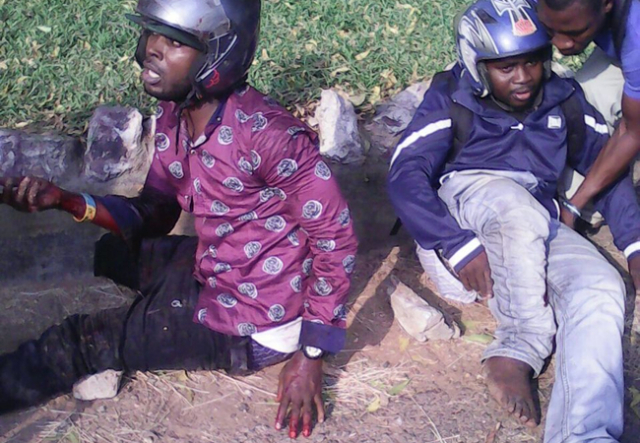 Police have arrested a supervisor at the Cantonments branch of Koala Shopping Mall in Accra after his alleged role in a foiled robbery attempt Saturday.

Greater Accra Region Police Public Relations Officer ASP Afia Tenge told Joy News, Gilbert Osabutey allegedly gave information to two armed robbers leading to an attack on a colleague who was on her way to deposit money at the bank.

The incident occured at about 10am and involved two robbers including a Nigerian and an accomplice, Doe Ahiagbeku 28, alias 'Old Soldier' who is a security man at ACACIA Construction firm. They have been arrested and are assisting the police in their investigations.

The robbers – Abaliku Sannie 35 and Oko Quaicoo 30 – who were on a motor bike shot at the lady in an attempt to take the company's money she was carrying.

Apparently, she had been sent by her office, Koala Shopping Mall, to deposit the undisclosed amount at the bank.

A taxi driver who witnessed the incident, gave the two a chase and knocked them down. They were arrested by passers-by.

“The police preliminary investigations indicate that the entire robbery was masterminded by the supervisor of the Koala Shopping Mall,” ASP Afia Tenge said.

Extracts of a video of the arrest of the two robbers circulating on social media show angry eyewitnesses pouncing on them to ensure they don’t run away.

The victim who sustained gunshot wounds in her thigh and calf is receiving medical attention.

The robbers are also responding to treatment.

ASP Afia Tenge indicated that the taxi driver whose effort helped in arresting the robbers would be rewarded by the police administration and including repairing his damaged vechilce.