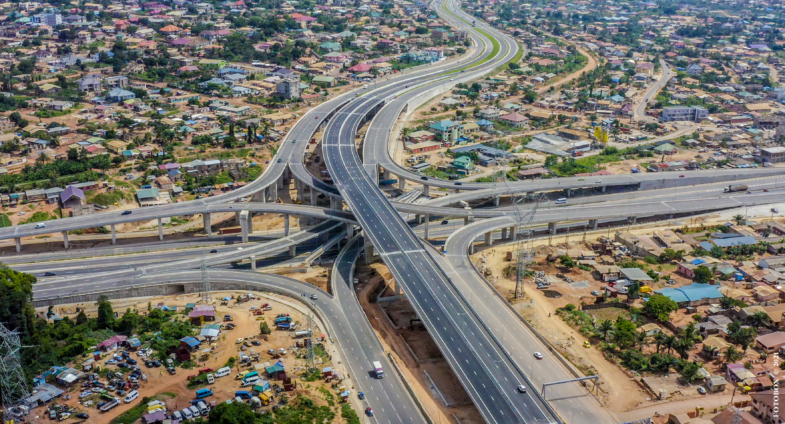 Fifty years from today, the Pokuase Interchange will still be serving the country efficiently and that is a tribute to President Nana Akufo-Addo’s visionary thinking.

The reason is simple. An interchange is rated according to how well it is able to distribute traffic over its shelf life. By changing the design of the Interchange from three-tiers to four, the ‘Level of Service’ of the Interchange was remarkably altered for the sake of posterity.

The Level of Service of an Interchange is defined by how efficiently the interchange distributes traffic and by the delays experienced at the interchange. A new interchange like Pokuase will usually have high efficiency or an A-rating at the beginning.

However, these conflicts have been totally eliminated by splitting the middle tier movement in the original design to two separate movements- second tier – for left-turn movements for vehicles from Nsawam to Kwabenya and Accra to Awoshie.

Whilst the left-turn movement from Awoshie to Nsawam and Kwabenya to Accra is now being done on the third tier. “This has significantly improved the Level of service of the interchange well into the future” says Alhaji Absas Awolu, Director of Urban Roads, the agency under the Ministry of Roads and Highways responsible for executing the showpiece project.

Provision has been made for a future Bus Rapid Transit Route on the ground level for service lanes in a bid to separate local traffic from that of the highway.   Designs for the utilization of the space under the interchange has also been completed and this will be different from how the spaces under other interchanges are being used.

Indeed, the Pokuase interchange is a major monument to the skyline of Accra and all credit goes to the Government for it.

In keeping with all Akufo-Addo projects, Pokuase Interchange was finished on time and avoided unfortunate costly overruns on the budget. Kwasi Amoako Atta, MP, the Minister for Roads and Highways ensured that we will not have a Saglemi-like project on our hands. In Saglemi, $200 million was approved for five thousand homes.

The amount stayed the same even when the number of homes was reduced to 1500. In the end, only 1200 homes were built at the same contract sum of $200 million.

Even then there is no sewerage system, electricity or water for the homes which were built.  No way Pokuase was going to suffer that fate which seemed to have been widespread in some infrastructure projects in past administrations.

Some Euroget Hospitals and the University of Ghana Medical Centre readily come to mind.

It is the reason the President was categorical in claiming that, on the Pokuase Interchange, he had achieved his goal of protecting the public purse, a promise he made when he assumed office in 2017.

The redesign and engineering of the Pokuase Interchange came at no extra cost plus there were no overruns to the schedule which also meant no extra cost to the taxpayer in terms of additional funds.

Its difficult to tell what part of the daily rush hour was more dreaded by commuters who regularly used the Pokuase junction as it was previously known.  Commuters from say Kuntunse, Amasaman, Pobiman, Pokuase, Kwabenya and its environs knew they needed to allocate at least two and half hours from their places of abode to work if they were coming to the Central Business District.

The Pokuase Junction alone was responsible for at least one and half hours of that traffic stress.  Now it takes a maximum of ten minutes due to the efficiency of the interchange.

Going back home was similarly nightmarish. Three hours at least was provisioned by residents in traffic. The damning effect was palpable. Commuters were stressed by traffic.

Residents in and around the area needed to leave home early and return late. Families were perpetually grappling with how kids were sent to school and how they were picked up and many other soft factors.

Today, the interchange is ensuring better quality of life for families through easier and efficient transportation connections.

Kwaku Tandoh, a resident of one of the estates in Kuntunse joked at the commissioning that the interchange was going to improve his conjugal life as his wife who worked in the central business district always returned from work exhausted and had to leave at dawn to have any chance of starting work before 8 am.

It sounded trivial but I realised he was extremely liberated by that thought and had made it a point to come and cheer the President at the commissioning of the interchange.

The Pokuase interchange is part of the Accra Urban Transportation Project (AUTP). The African Development Bank headed by “that Great Pan African Visionary” as the President chooses to describe Akiwumi Adesina approved an $84 million facility for this West African symbol of infrastructure engineering.

As part of the construction of the interchange, some twelve (12) kilometres of road have been constructed in the Pokuase -Kwabenya enclave. There are also two-foot bridges erected to protect the lives of pedestrians. Fifteen (15) people had lost their lives trying to cross the road two years prior to the start of construction.

The sacred Gua forest in the Centre of Pokuase which is a major source of supply of tanker water to Accra form Pokuase has also been secured as part of the works around the interchange.

Fourteen basic schools have benefited from the building of ICT labs which is projected to benefits ten thousand school children in the next ten years. Additionally, a Gari processing factory which employs only women has been built for the women of Pokuase and its environs.

All these projects are geared towards giving the economy of Pokuase a fillip. However, one important leg of the real economics of the interchange is how quickly goods can move from the Nsawam area to the Port. The export giant Blue Skies supplies freshly cut fruits overnight to the UK Market right from the Nsawam area.

Having quick access to the airport is welcome news for their business. Other companies on the road, like Yayra Glover the Swiss oriented organic Cocoa promoter, Glofert, manufacturers of fertilizers and many companies in the Suhum-Nsawam area are thoroughly excited about their access to the port and airport for quick transactions.

The Pokuase Interchange is on the N4 which connects Accra to Kumasi and by extension Wa, Tamale and Burkina Faso. Ghana’s exports receipts to Burkina Faso in 2017 exceeded $200 million, according to the Harvard/MIT Atlas of Economic Complexity report. A sizeable chunk of goods meant for Burkina are carted through the Accra- Kumasi Corridor. Easing the dreaded bottleneck at Pokuase means shorter travel time and more opportunities for business.

The second leg of the interchange economics is the growth in Real Estate. Houses in Pokuase for years failed to appreciate in value due to the incredible traffic experience on that stretch.

Though Pokuase is closer the Central Business District (21.1Km), Kasoa and Oyibi which are farther(32.5km) and (32.8 km) respectively, experienced housing booms because “Pokuase had insane traffic” according to realtors. Both Oyibi and Kasoa off course were peri-urban areas in Accra but have now almost integrated into full urban developments in Accra.

Pokuase is now the poster town to own a house or rent a house in Accra because the binding constraint of ‘brutal’ traffic as we say in Accra, has been solved. Estate developers who have already secured plots there are in fortune land.  Pokuase and its environs are expected to have be in boom season soon because of all the housing estates about to take off in the enclave.

A Charge to Keep

Indeed! The Pokuase Interchange is an alluring legacy of Akufo-Addo. How do we ensure that it keeps giving efficient service over its lifetime? Minister for Roads and Highways Kwasi Amoako Atta, MP, has got a plan.

“We are greening all the spaces around the interchange. There will be no flooding here when it rains after the greening because those spaces will absorb the water. What is of prime import is that people will not come and sell around here. I am personally making a commitment to keep the sanity around here.

Anyone can dare me. If you come and put a kiosk or something to sell there in the morning, I can guarantee you by the next day it will not be there. I will personally remove it. Dare me if you want. This interchange must continue to be a thing of beauty. It will not be allowed to become a market centre.” Well said Honourable Minister.

This is the only way. Long Live Pokuase Interchange and may Nana Addo Dankwa Akufo Addo’s legacy forever be etched on your mind.

Kojo Frempong is a multi-disciplined development enthusiast with keen interest in technology transfer, commercial agriculture, infrastructure finance and development. He is currently stationed at the Ministry of Information, Ghana.