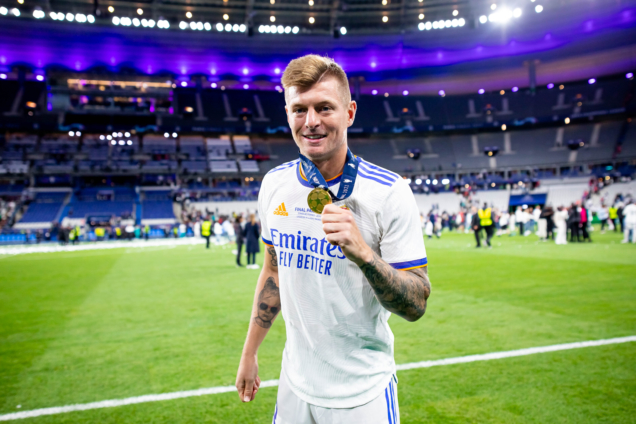 PARIS, FRANCE - MAY 28: Toni Kroos of Real Madrid celebrates with his winners medal following his team's victory in the UEFA Champions League final match between Liverpool FC and Real Madrid at Stade de France on May 28, 2022 in Paris, France. (Photo by Mateusz Porzucek/PressFocus/MB Media/Getty Images)

Real Madrid star Toni Kroos does not believe that three versions of him would make an ideal midfield for the Spanish champions.

Kroos shook off injury troubles to play a key role for Madrid as they claimed La Liga and Champions League crowns in the 2021-22 campaign.

The Germany international starred in midfield alongside Luka Modric and Casemiro, and he believes the three players complement each other, whereas playing alongside clones of himself would not make a good combination.

What did Kroos say about Real Madrid’s midfield?

Asked about the strength of his partnership with Modric and Casemiro, he told Kicker: “First and foremost it is the quality. Then it’s because each of us knows our own characteristics exactly and contributes them accordingly so that they work together.

“Three versions of Toni Kroos? That wouldn’t be so effective. We complement each other on the pitch because we want to play together and be successful together. And we have a great team around us that defends at the back and executes at the front.”

Kroos has now won three La Liga titles and the Champions League four times since joining from Bayern Munich in 2014.

The 32-year-old looked back on his favourite title success with the Santiago Bernabeu team, admitting that his first win is the one he remembers most fondly.

“Winning the first title with Real Madrid in 2016 was the most valuable for me,” he added.

“One of the reasons I switched to Real at the time was to win the Champions League with this big club.

“That was successful that evening. And this title meant more to me than winning the title with Bayern, because I missed the final with an injury. That was therefore only half a win for me.”