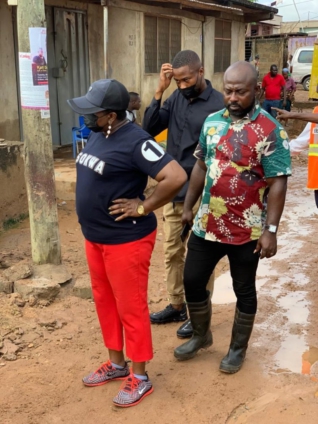 The Member of Parliament for Asokwa, Patricia Appiagyei, has charged the Municipal Assembly to take urgent steps to inspect building permits of people who have built-in swampy areas in the Municipality.

The MP made the recommendation during an inspection tour of flooded areas in the Municipality following a heavy downpour that left many residents stranded in floodwaters.

Upon seeing the extent of damage to some structures in the Asokwa Extension area, the MP called for the verification of building permits for those houses as part of efforts to find a lasting solution to the perennial problem.

Accompanied by officials of the Works Department of the Assembly and the National Disaster Management Organisation (NADMO), Madam Appiagyei tasked them to engage those who had built-in waterways and deal with them according to law.

She questioned the motive of the perpetrators and stressed the need to enforce the Assembly’s by-laws in the interest of the larger community.

Among the areas, the MP and her entourage toured were Old Asokwa, Kaase, Asokwa Extension, Atonsu and Agogo.

At the Atonsu and Agogo Markets, Madam Appiagyei assured the traders of the government’s commitment to put their structure in good shape ahead of their relocation for the construction of a new market.

The MP called on the traders at the two markets to support the government as it pursued sustainable economic policies including; the development of the markets in the country.

She later visited some selected schools to inspect ongoing classroom projects aimed at addressing congestion in those schools.

She implored the pupils to pay attention to their studies and learn to be disciplined to become useful citizens in future.