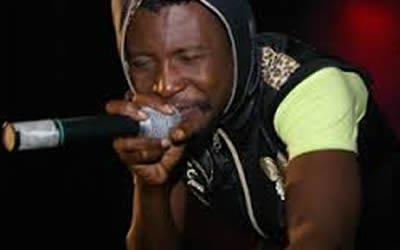 He has vanished and re-surfaced so many times within the last eight years that his despondent fans have almost given up on him. But now, brilliant hiplifer Okomfo Kwadee, noted for his powerful traditional lyrics, says he is now back for good.

Kwadee, 33, real name Jerry Anaba accompanied by Fareed Yakubu, CEO of his new record label, Black Star Records, told Graphic Showbiz last Tuesday that the artiste is back with a single and very ready for an active life in music circles again.

“Infact, I am not only back with a single but I promise to release at least one single each month till the end of this year".

The video of the first one 'Fee Fee', will be shown on Metro TV, GTV and GhOne on Saturday, March 1.

“ Fee Fee', a usual Kwadee folklore story style will be followed by Few and High, a Dancehall song in mid-March. Another one featuring Kwaw Kese, De Kan will join the train and the list goes on and on.”

Asked if he will be able to match up with all the new genre of music currently in the system after being off the radar for a long while, Kwadee said: ‘ I am Lord of my own style. When I first came out in 2001, hiplife was already in the system but I was well accepted so I will not have problems at all. I don’t follow the crowd. All I have to say is that people should just watch out for me. Afterall, Saturday is not far away.”

On why he has been playing ‘hide and seek’ with his fans,' Kwadee said, he had been ready to come out a long time ago but had problems with management.

“ Yes, I have been missing not because I am a spent force as some people have been saying. I even heard I was dead, I was mad and had been hospitalised. I decided to keep quiet and allow all the rumours to die out.

I was ready but had management issues but that has been sorted out and I think the time is now right to move on from where I left off.

“I am here to stay and going nowhere. I am back to push Ghana music to another level. It is going to be bigger than before.”

Touching on his mental condition, Kwadee said: “ People said I was mad and I have been hospitalised for doing drugs. That is not true. I am not a drug addict. I admit I was seeing a doctor for stress-related issues but I didn’t go mad.

“ I doubt if I would have been able to do music if I had mental challenges. I have loads of songs. What I have to do now is to
shoot videos and put them out there for my fans. Saturday is just around the corner and my music will speak for me.”

Kwadee who said he missed his fans, thanked them for being there for him all this while.

“ I want to thank Ghanaians for their continous support. Keep supporting me as you did in the beginning. God bless every body. I thank you all for being appreciative.”

Kwadee, a native of Navrongo in the Upper East Region, propelled to the limelight in 2001 with his debut album Kwaadee which was a hit. His second album, Metoa Su, was even bigger. In 2007, his song Ka Wonan To Su won the Ghana Music Award for Best Original Song/Lyrics