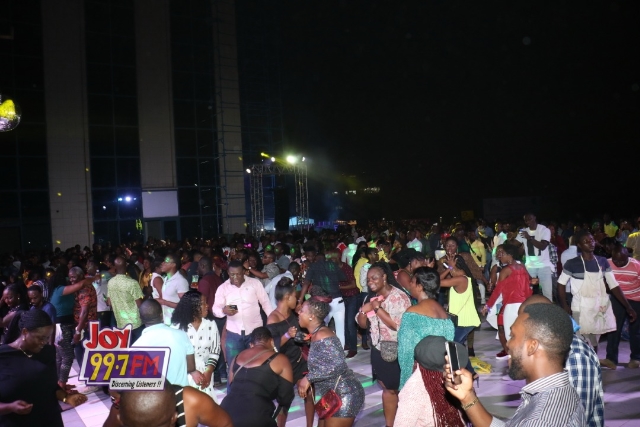 Revellers at the Silver Star Tower on Friday were thrown into a frenzy when some musicians took to the stage during the Joy FM’s 90s Jam.

The party lovers who thronged the first official party of the year had a good time by dancing to songs from the 1990s as dished out by DJ Black, Sammy Forson, Andy Dosty and Nii Ayi Tagoe.

Little did the audience know about any guest performances until MC Lexis Bill introduced Ex-Doe. The ‘Maba’ hit-maker thrilled fans with jams like ‘Daavi Medekuku’ and ‘Yebre’.

Patrons were again, taken aback when Obour mounted the stage and performed the evergreen ‘Konkontiba’ and ‘Mesoodae’, backed by a roaring welcome.

Then there were Prince Bright and Shoetan of Buk Bak fame. The duo did individual performances at the different times on the night, both triggering a resounding response from the ecstatic gathering.

Before leaving the stage, Prince Bright could not help but eulogise The Multimedia Group and Joy FM for their instrumental role in shaping his musical career as the company turns 25 this year.

One love! Put your lighters up! Last night was wild! We sang and we danced. I brought out my brother @princybright of BukBak fame and the crowd loved it! #Joy90sJam was awesome. @Joy997FM pic.twitter.com/NojrONUR9u

As if the star-studded lineup was not enough, then came the Madtime Entertainment boss, Kwaw Kese.

He was greeted with a thunderous sing-along as he took the audience down memory lane via back-to-back tunes from the days of ‘Kwakwa’, ‘Na Ya Tal’ and ‘Obra Yebo’.

The success of the event set the tone for a good year as patrons danced their way into a new decade hoping for accomplishment and progress in their endeavour.

DISCLAIMER: The Views, Comments, Opinions, Contributions and Statements made by Readers and Contributors on this platform do not necessarily represent the views or policy of Multimedia Group Limited.
Tags:
90s Jam
Ex Doe
Kwaw Kese
Obuor