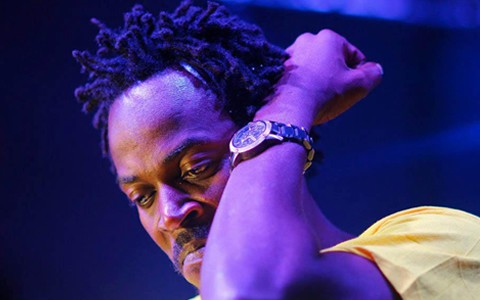 Controversial hiplife artiste Kwaw Kese will later today appear before a circuit court in Kumasi to secure a bail for the fourth time.

The artist has been remanded into prison custody for a little over a month after he was arrested for allegedly smoking cannabis, but previous attempts to get the court to grant him bail has been turned down by the court.

The controversial rapper was by the police un Kumasi on Saturday, November 22, 2014 for allegedly smoking cannabis.

He was remanded at the Kumasi Central Prison to reappear on Monday, December 8 after prosecutors argued that they were still investigating the matter.

Luv FM’s Erastus Asare Donkor who was in court, said the judge refused to grant Kwaw Kese bail on grounds that the use of narcotics was a non-bailable offense.

He was again denied bail on Friday, December 12, 2014 even though his lawyer argued that Kwaw Kese was being held for an unduly long time over a simple suspicion because the results of the substance which they claim is cannabis has not been obtained.

But the prosecutions counted his argument, insisting they have results of the test and were ready to go on with the trial.

The prosecution further argued that per the amendment of the criminal code, the musician cannot be granted bail. The prosecution’s argument was upheld by the judge who urged that he process be sped up.

Meanwhile, appeals by several artists and the Musicians Union of Ghana (MUSIGA) for Kwaw Kesse, born Emmanuel Botchwey to be released, have proved futile.