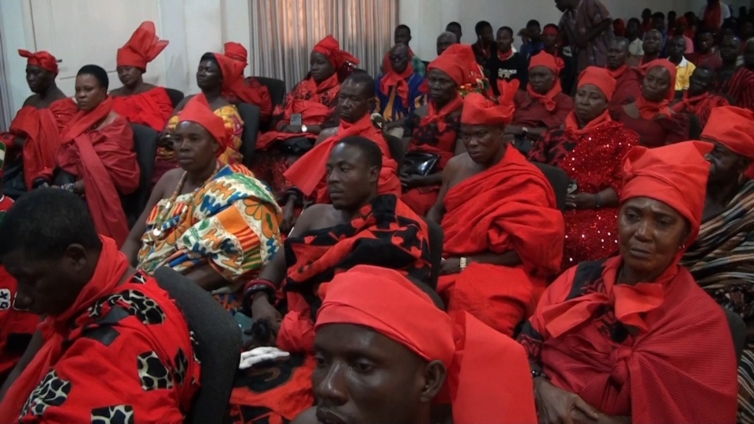 The Ahanta Traditional Council has called on the Special Prosecutor, Kissi Agyebeng, to retract the statement of influence-peddling on the Western regional member of the Council of State on the issue of tax waivers enjoyed by her company.

The council says it is dismayed at the supposed attempts to denigrate the reputation of the Chief Executive of the Labianca Company, Eunice Jacqueline Buah Asomah-Hinneh, despite what they claim is evidence that she did not in any way influence favours afforded her company.

“The Council is bemused that despite the open denial by the Commissioner of Customs, Colonel (rtd) Kwadwo Damoah, against any influence perpetrated by Eunice Asomah-Hinneh on him for the import duty waiver, several media accounts continue to insist wrongdoing”.

The Council said, they will resolve to peruse all necessary steps to protect the image of the Chief Executive who is a daughter of their land.

Clad in red clothes, headbands and hand bands the close to one hundred chiefs, queens and traditional leaders from the Ahanta Traditional Council in the Western Region all sat down in anger.

They were soon joined by some residents from the Ahanta land chanting songs of war.

The traditional leaders had gathered to express their dissatisfaction with what they described as a deliberate attempt to destroy the business and image of Eunice Jacqueline Buah Asomah-Hinneh.

Chief of Ahanta Aboade Nana Etsin Kwofie, who spoke on behalf of the  Ahantahen Otumfuo Badu Bonso said they find the assertion by the special prosecutor that their daughter used her position to influence the tax waiver unfortunate.

According to him, there are other companies that are benefitting from around a 12 percent tax rebate and, therefore, do not understand why the Labianca Company should deserve such attacks.

Nana Etsin Kwofie says the Ahanta Traditional council fears the attack on the Western Regional member of the Council of State is a threat to business and investment from the private sector and on employment.

Flanked by other Chiefs from Ahantaman, Nana Etsin Kwofie made a passionate appeal to the media to be circumspect in their reportage and also for the Special Prosecutor to be diligent in its quest to deliver justice.

DISCLAIMER: The Views, Comments, Opinions, Contributions and Statements made by Readers and Contributors on this platform do not necessarily represent the views or policy of Multimedia Group Limited.
Tags:
Ahanta Traditional Council
Labianca
Special prosecutor