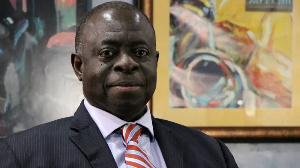 The Executive Director of the Center for Democratic Development (CDD-Ghana) has said that the dispute between the Office of the Special Prosecutor (OSP) and Labianca Company Limited (‘Labianca’) raises a number of troubling questions about the state of governance in Ghana.

His statment follows the OSP’s recovery of an amount of ¢1.074 million from the company owned by a member of the Council of State, Eunice Jacqueline Buah Asomah-Hinneh.

The OSP contended that Madam Asomah-Hinneh used her position as a member of the Council and member of the Board of Directors of the Ghana Ports and Harbours Authority (GPHA) to get a favourable decision from the Customs Division of GRA.

In a press release issued by CDD-Ghana, Prof Emmanuel Gyimah-Boadi questioned why the President would appoint Madam Asomah-Hinneh to the board of a public agency when she has private business dealings with the agency.

He explained that this sets up the Council of State member for a conflict of interest.

“In conclusion, it is obvious that the entire sordid episode speaks specifically to the entrenchment  of incumbent leaders and political elite capture of Ghana; and generally, to the alarming decline in governance standards in our 4th Republic.”

“Therefore, as a recommendation, this unfortunate event highlights the urgent need for an ethics czar at the Presidency, Executive Branch, Council of State, and other important decision-making and public resource allocation agencies and institutions.”

Many anti corruption campaigners and institutions commended the OSP for his investigations while raising questions about the operations of Customs.

But, Speaking at the Customs Division Management Retreat at Kumasi, the Commissioner of Customs, Col. Kwadwo Damoah (Rtd) insists the report of the Special Prosecutor was released with malicious intent.

“The Authority would like to state for the record that it accords the Office of the Special Prosecutor (OSP) the respect and the dignity that the OSP carries,” he said in a press release on Sunday night.

Per his assessment, the comments by the Commissioner of Customs “were made in his personal capacity and do not convey the opinion of the Board and Management of GRA.”

The statement further pledged to GRA’s readiness to assess the OSP’s report and develop measures to seal loopholes that are found to be impeding revenue mobilisation at the ports.

Also, the private citizen who petitioned the Office of the Special Prosecutor (OSP) on corruption-related offenses involving Labianca Company Limited has reacted to the findings.

Frank Asare on 16 November 2021 reported the La Bianca Group of Companies for alleged corrupt, illegal and questionable dealings between Labianca and the Customs Division resulting in unlawful markdown or reduction of benchmark values of frozen food products imported by Labianca under the guise of customs advance rulings.

While commending the OSP for working and probing his petition, Mr Asare noted that the funds recovered from Ms Asomah-Hinneh’s company is grossly understated.

He also noted that stringent punishment should be meted out to serve as a deterrent to other public office holders.

On the back of this, he said he would petition the appropriate bodies for her removal from the Council of State.

DISCLAIMER: The Views, Comments, Opinions, Contributions and Statements made by Readers and Contributors on this platform do not necessarily represent the views or policy of Multimedia Group Limited.
Tags:
CDD-Ghana
Council of State
Eunice Jacqueline Buah Asomah-Hinneh
Labianca
Prof Gyimah-Boadi