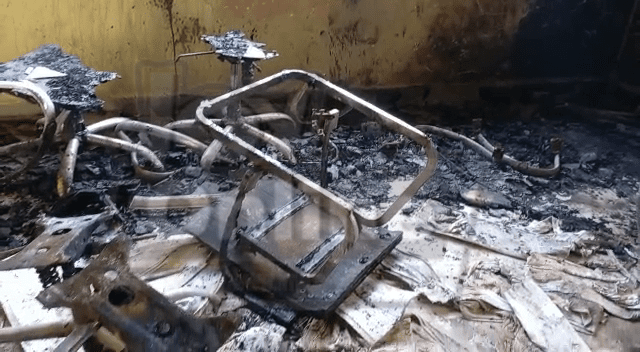 Some suspected land guards have allegedly set ablaze a newly built police station in Tenbibian near Obom in the Ga South Municipality.

Residents of the area who have been thrown into a state of shock said the edifice was set to be commissioned this week.

According to eyewitnesses, the suspects reportedly vandalised the glass doors before setting all furniture in the commander’s office on fire.

The Adom News Correspondent, Kofi Agyei, reports that due to the notorious activities being perpetrated by some land guards in the area, Tenbibian, Obom, and Ashalaja have all been declared “no go areas” by the residents.

However, Chief of Tenbibian, Nii Quashie Amponsah has called on the Police to investigate the matter and arrest the culprits.

“It is an unfortunate incident which has not rested well with me nor any of my council members or the people of this community. I am pleading that they [Police] investigate this incident.

“We are not happy with it. We are not behind it. We don’t like what happened and we are not in support of it. So the Police and all its bodies should take this matter up and make sure the culprits are brought to book,” he insisted.

DISCLAIMER: The Views, Comments, Opinions, Contributions and Statements made by Readers and Contributors on this platform do not necessarily represent the views or policy of Multimedia Group Limited.
Tags:
land guards
Police station
Tenbibiano