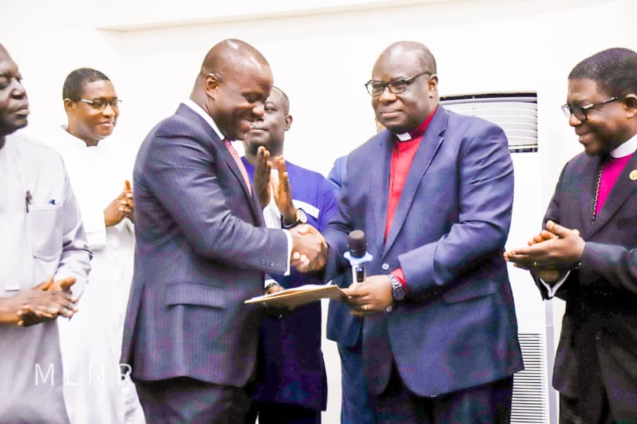 The Minister for Lands and Natural Resources, Samuel A. Jinapor has courted the support of the leadership of the Christian Council of Ghana to help government halt the illegal mining menace in the country.

Describing the engagement with the Council as a productive, impactful and useful one, Samuel Jinapor said the meeting is in line with President Akufo-Addo’s quest to mobilise broad-based national support for the ongoing fight against illegal mining.

He said the overarching outcome is the Council agreeing to work together with government to address the illegal mining situation.

“We need strong and authoritative voices to be able to transform the hearts and minds of the Ghanaian people,” he stated.

The Minister’s meeting with the Christian Council in Accra, follows series of engagements with key stakeholders, including the Council of State in an effort to obtain reliable and sound inputs to help government to fashion out appropriate steps, to among others fight the canker, improve mining operations and enhance the ecological system of the country.

Mr. Jinapor further thanked the Christian Council for their patriotism, nationalism and unflinching commitment to help the government tackle the age-old problem of illegal mining.

On behalf of the Council, the Chairman of the Christian Council of Ghana, Prof. Joseph Obiri Yeboah Mante pledged their unwavering support to collaborate with government to curb the menace.

The Council also used the occasion to present to the Minister, a copy of their statement which sought to call for a temporary ban on small-scale mining for the Minister’s perusal and study.

The all-important meeting was also graced by the Presiding Bishop of the Methodist Church, Ghana, Most Rev. Dr. Paul Boafo and a host of other Christian leaders.

In a related development, Samuel Jinapor, on Monday, October 24 met the Chairman and members of the Council of State to provide updates on the ongoing fight against illegal mining.

The meeting with the Council also afforded the Minister the opportunity to inform the Council of the current developments in the sector, especially in relation to the fight against illegal mining and mining operations in general.

DISCLAIMER: The Views, Comments, Opinions, Contributions and Statements made by Readers and Contributors on this platform do not necessarily represent the views or policy of Multimedia Group Limited.
Tags:
Christian Council of Ghana
Galamsey
Lands Minister Samuel Abu Jinapor