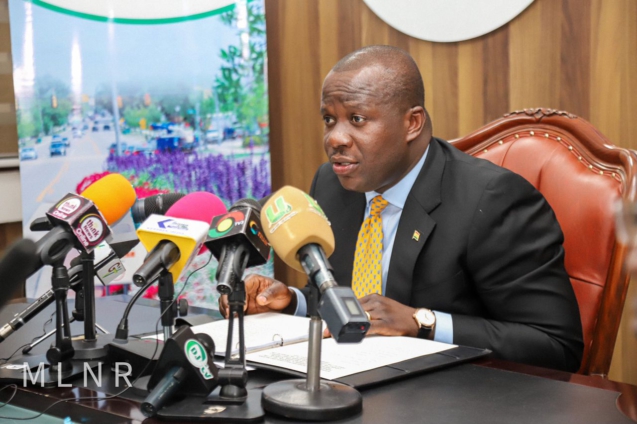 The Minister for Lands and Natural Resources, Samuel Abu Jinapor has inaugurated a committee to oversee to the planning and implementation of the Green Street Project which is set to commence immediately.

At a brief ceremony held at the Ministry’s Conference Room on Tuesday, August 2, 2022, the Lands Minister tasked the members of the committee to act virtuously in helping the government accomplish its aim for the project.

Disclosing the rationale behind the Green Street Project, Samuel A. Jinapor stated that the prevailing circumstances relative to climatic conditions as well as government’s bid to beautify the nation’s cities and towns necessitated the birth of the project.

He said that whereas the successful Green Ghana Project is government’s flagship afforestation program, the Green Street Project will focus on the growth of trees to improve the aesthetics of the cities and towns.

Mr. Jinapor remarked that government has taken notice of the quality of air in the major cities and believe that greening the cities is a definite way of improving it.

In view of the fact that the exercise will perform the dual role of improving the environment and making the cities pleasing to the eyes, he said specific trees crops will have to be deliberately and cautiously selected by the committee.

“A look around some of the major cities across the world, reveals an intentional planting of particular types of trees, to add to the aesthetics of the city. London in the United Kingdom, Paris in France, and to some extent, Cairo in Egypt, Abuja in Nigeria and Abidjan in Ivory Coast, are just a few examples”, he stated.

“Government has, therefore, decided to implement this Ghana Green Street Project, as part of measures to beautify our cities and contribute to global climate action. The overarching objective of this project is to plant appropriate tree species, capable of providing both aesthetic view and environmental related benefits for a healthy and sustainable world”, he added.

The first phase of the project according to the Minister, will see to the planting of selected trees on principal streets in the major cities of Accra, Kumasi, Tamale and Sekondi-Takoradi before being extended to the other regional capitals.

Owing to the robustness and ambitious nature of the project, the committee, he said , which is co-chaired by the Deputy Minister of Lands and Natural Resources responsible for Forestry and that of the Local Government, Decentralisation and Rural Development draws members from the Ministry of Lands and Natural Resources, Ministry of Local Government and Decentralization, Department of Urban Roads.

The committee is also composed of members from the Forestry Commission, Ghana Highway Authority, Department of Urban Roads, Department of Parks and Gardens, Zoomlion Ghana Limited and Mullen Lowe.

The committee has been charged with the responsibility of identifying principal or major streets and avenues in the cities where trees will be planted, picking out the resilient and fast-growing tree species to be planted in each of the regional capitals of the country and also developing detailed strategy, work plan and budget for the project, including strategies for nurturing and protecting the trees planted.

A Deputy Lands and Natural Resources Minister, Benito Owusu-Bio who is a co-chair of the committee welcomed the responsibility handed them and assured that the committee will discharge its duties to utmost satisfaction.

Mr. Martin Adjei Korsah, the Deputy Local Government Minister said the partnership between his Ministry and the other Ministries, Departments and Agencies involved in the project is an indication of the willingness by government institutions to work together for the growth of the country.