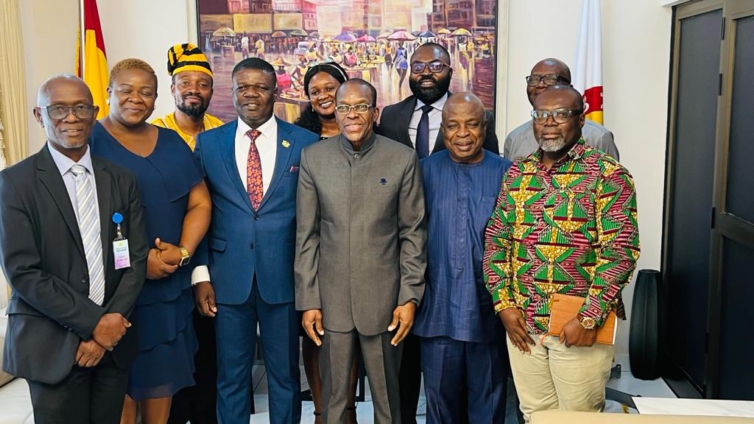 The Interim Executives of the Law Society of Ghana (LSG) paid a courtesy call on the Speaker of Parliament, Alban Kingsford Bagbin at his office on Tuesday, September 20, 2022.

The purpose of the visit was to congratulate him on his elevation as President of the Commonwealth Parliamentary Association (CPA) of the world and also to introduce the new Lawyers Society of Ghana to him.

It must be placed on record that nowhere in the Speaker’s welcoming remarks during our visit, did he ever state that he has resigned from the Ghana Bar Association (GBA).

In his remarks, he expressed in strong words, his revulsion about the state of the GBA and wishes to see a change for a better Bar Association committed to the aims, objectives and ethics as captured and practiced globally.

The Speaker welcomed the formation of the Law Society of Ghana (LSG) and pledged his unflinching support to the Interim Executives and the Society to establish and develop a better professional group.

He was very excited to learn from the Interim President, the novelty of roping on board not only lawyers but paralegals, law Students at the Ghana School of Law and the Law Teaching Faculties at the Universities.

His interest and excitement of LSG also stems from the fact that he together with learned senior Ward Brew, Esq had actually earlier sponsored the formation of the Bar Association of Ghana (BAG) when the frustration from the GBA became unbearable until some impediments came their way, which impediments rendered the forward march of BAG impossible or near impracticable.

He charged the LSG to seek to shape national discourse and fight against injustice in all forms in Ghana.

According to the Speaker, the GBA has now become too elitist, stressing that he used to pay his dues religiously until it came to his attention that any lawyer that had close association with the then Public Tribunal Court was not recognized and paid their last respects by the GBA, upon death.

He cited instances. As a result, his interest in the GBA has diminished and with it the non-payment of his membership dues.

He advised LSG to come up with reasoned legal opinions and constructive criticisms of Court judgements so as to enrich our law reports and publish same in Journals. He finally pledged his overwhelming support to the LSG.

The delegation was led by the Interim LSG President, Hon. Rockson Dafeamekpor, Esq. (MP), who congratulated the Speaker on his new position as the President of the CPA. The Acting President bemoaned the GBA deviation from its core values and mandate in terms of fairness, inclusiveness, defending lawyers and promoting lawyers’ welfare.

The Acting President was accompanied by the Vice President Biadela Mortey Akpadzi Esq, General Secretary Atukwei Quaye Esq, Treasurer, Enoch Deegbe Esq, Women Commissioner Anatu Anne Seidu Bogobiri, Dep. General Secretary David Worwui-Brown, Esq and Deputy Director of Communications, Mercy Dankwa, Esq all in interim capacities. On the side of Speaker, he was in the company of his chief legal and political advisors.

The Courtesy visit was part of a rolled-out plan to introduce and interface LSG with prominent men, women and relevant academic & state institutions in Ghana by the end of the year.

DISCLAIMER: The Views, Comments, Opinions, Contributions and Statements made by Readers and Contributors on this platform do not necessarily represent the views or policy of Multimedia Group Limited.
Tags:
Alban Bagbin
Law Society of Ghana
Speaker