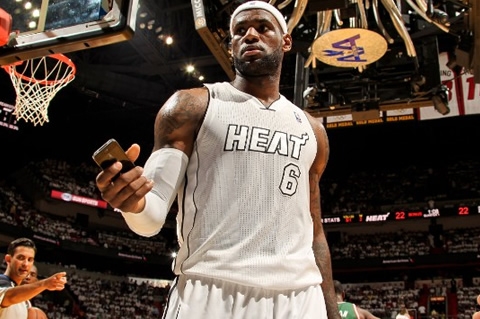 In the tech world, paying a celebrity to love your product can sometimes backfire.

On Wednesday, NBA superstar LeBron James took to Twitter to announce a nightmare of the mobile age: "My phone just erased everything I had in it and rebooted. One of the sickest feelings I've ever had in my life!!!"

Here's the problem: That phone was, presumably, the Samsung Galaxy Note that the Miami Heat star is paid big money to endorse.

His was just the most recent in a series of public missteps by celebrities who have been increasingly called upon to create buzz for tech products.

James quickly deleted the tweet and soon thereafter — presumably with some help from his friends at the Korean gadget company —posted this: "Close call. Wheew! Got all my info back. Gamer! Lol."

It's not the first time a celebrity, an endorsement deal and Twitter have merged to create an awkward gaffe.

Just this month, Oscars host Ellen DeGeneres took the Selfie Seen Round the World with a smartphone from Samsung, a major sponsor of the awards. But, backstage, she was caught tweeting Oscars thoughts from her iPhone.

Singer Alicia Keys claimed she was hacked last year (the Anthony Weiner Defense?) when she apparently sent a tweet from an iPhone just days after she was named a "creative director" for BlackBerry.

And in 2012, Oprah Winfrey (or one of her staff) raved about the new Microsoft Surface tablet — in a tweet using Twitter for iPad.

In March 2013, "The Big Bang Theory" star Kaley Cuoco tweeted some (sponsored) praise for Dish Network's Hopper, a DVR system. Turns out, CBS, which airs "Big Bang," was locked in a lawsuit with Dish and other DVR makers over the systems' ability to skip ads.

She did the obligatory tweet delete. Dish accused CBS of making her. CBS denied it. And the beat goes on.

Martin Lindstrom, a brand adviser to Fortune 500 companies and author of "Buyology: Truth and Lies About Why We Buy," said such flubs are "a major risk" companies run when they sign up celebrity endorsers.

But don't expect the practice to go away anytime soon. Lindstrom also said that, even in these faux-pas cases, the endorsements pay off.

"We learned that the positive effect seems surprisingly stronger than the negative effect," he said, citing research conducted for one of his books. "In reality, this means that the Oscar viewers are much more likely to remember Ellen's Samsung endorsement, including the Samsung name, and (are) hardly judging on the brand if a celebrity messes around with the situation."

And while celebrity tweets make the headlines, Lindstrom said, the prevalence of social media now means they're not the only ones we look to to decide what we think about a product.

"The concept of conventional celebrity endorsement has expanded from just engaging the superstars to everyone from the 10-minutes-of-fame person to even people who have carved out some niche audience on a very focused topic," he said.