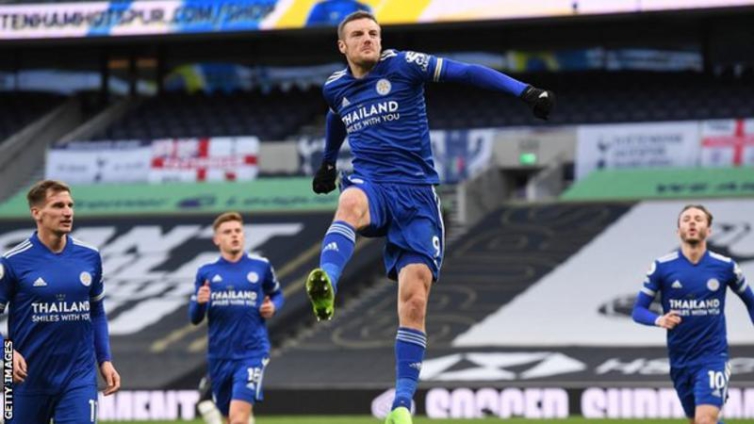 Leicester City have scored eight Premier League penalties this season, three more than any other team

Leicester City climbed to second in the Premier League as they overcame top-four rivals Tottenham to move four points behind leaders Liverpool.

In a hard-fought battle between the sides starting the day third and fourth in the table – Spurs one point above the visitors – it was the latter who established themselves as champions Liverpool’s closest challengers courtesy of Jamie Vardy’s penalty and a Toby Alderweireld own goal.

Vardy confidently dispatched his spot-kick in the fourth minute of first-half injury time, after referee Craig Pawson was advised to review Serge Aurier’s needless shove on Wesley Fofana via the pitchside monitor.

A VAR review for offside disallowed James Maddison’s well-taken finish three minutes after the restart, but Vardy’s header from Marc Albrighton’s excellent cross deflected in off Alderweireld to double Leicester’s advantage after 59 minutes.

Vardy’s opener arrived at the end of a closely contested opening 45 minutes, during which Spurs captain Harry Kane’s saved free-kick in the 34th minute and Foxes midfielder Maddison’s deflected shot from distance were the only other attempts on target.

Son Heung-min was denied at close range by Kasper Schmeichel as Jose Mourinho’s disappointing hosts were left frustrated in search of a response, while Leicester went close to a late third through Youri Tielemans.

Beaten 2-1 by Liverpool in their top-of-the-table meeting on Wednesday, former pacesetters Tottenham find themselves six points adrift of the lead.

DISCLAIMER: The Views, Comments, Opinions, Contributions and Statements made by Readers and Contributors on this platform do not necessarily represent the views or policy of Multimedia Group Limited.
Tags:
Leicester City
Premier League
Tottenham Hotspur