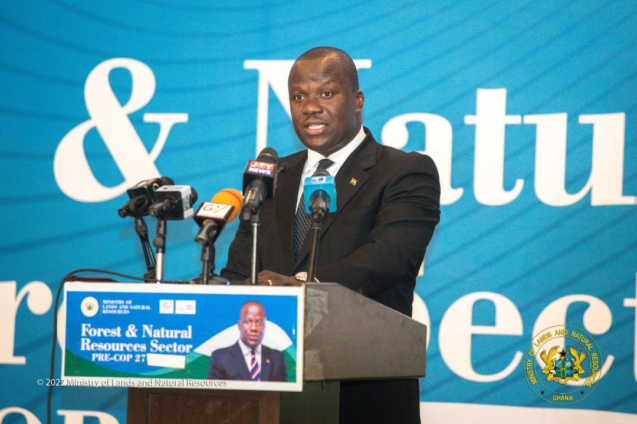 The Minister for Lands and Natural Resources, Samuel Abu Jinapor has called on all stakeholders of the twenty-seventh session of the Conference of Parties (COP27) to join hands with the Ministry of Lands and Natural Resources and the organizers to make this year’s event which is scheduled to take place in Sharm El Sheikh, Egypt from 6th -18th November, 2022, a resounding success.

Speaking at a Pre-COP27 event organised to bring together stakeholders in the nature-based Climate actions, the Sector Minister called on them to rise up and rally behind the Ministry to promote forest and climate-based initiatives for climate change.

“We look forward to an even greater participation and contribution to global conference at Sharm El Sheikh, Egypt and let us all join hands in solidarity to make COP27 a great success,” he said.

Highlighting the need and importance of COP27 Pre-event, he indicated that the event was to create a platform for stakeholders to share ideas and contribute to discussions on the country’s expectations in order to build on the momentum garnered at COP26 last year.

He announced that this year, with the help of the World Bank, the partnership for Forest and other stakeholders, Ghana has secured a pavilion at Sharm El Sheikh to showcase her climate actions, woo investors and have partnership engagements while appreciating the effort and contribution of the UK government which culminated into Ghana getting for the first time, a pavilion at the COP26 last year.

Mr. Jinapor outlined some of the activities scheduled to take place at the COP27 Ghana Pavilion, citing a side event to be hosted by the Office of the President as a pertinent example, he also mentioned a roundtable tropical forest ministerial event to be hosted by the Ministry and this he said will be to discuss forest solutions to climate change.

He noted that a key engagement at COP 27 is Ghana’s participation in the Forest and Climate Leader’s Partnership (FCLP), a COP26 Presidency initiative which is intended to give steam to the Glasgow declarations on forest and land use.

He continued that the FCLP will create a platform for members states to scale up forest conservation and restoration action to implement climate solutions and provide sustainable development.

He added that the partnership will, also, provide a unique space for intergovernmental collaboration and coordinated action with partners and stakeholders while announcing that President of the Republic, Nana Akufo-Addo will join President Biden of the United States, and other Heads of State and Government at a Forests and Climate Leaders’ Summit, on 7th November in Sharm El-Sheikh, to officially open FCLP.

The Lands Minister asserted that Ghana’s membership of FCLP is a testimony that the country’s efforts to accelerate emissions reductions has been recognised globally.

He disclosed that through these efforts,  Ghana is set to receive some 4,862,208 dollars as payment for the country’s efforts in reducing carbon in 2019. This he said will be distributed according to a highly consultative and transparent benefit sharing plan.

On her part, the United Kingdom High Commissioner to Ghana, H.E Harriet Thompson disclosed UK’S support towards series of events on Forestry at COP27 as well as the Forest and Climate Leaders Partnership event this year.

She continued that, “Ghana will be represented at the UK’s Forest Agriculture Commodity Trade Dialogue to update on progress one year from its launch at COP26. There is also the Cocoa Forest Initiative event to mobilize action from global chocolate makers and cocoa companies, with the Government of Ghana taking part”.

H.E Thompson noted that although the annual deforestation rate in Ghana is running at 3.5% with her forests under threat from agricultural expansion and illegal mining, tackling the menace will require a huge, complex and sustained effort that must recognise how climate, poverty, and business interests all interact both as part of the problem, and, ultimately, as part of the solution.

The well organised event was attended by members of the Diplomatic corps, Foresters, Representatives of the various MDAs, members of the Business community, among other stakeholders.

DISCLAIMER: The Views, Comments, Opinions, Contributions and Statements made by Readers and Contributors on this platform do not necessarily represent the views or policy of Multimedia Group Limited.
Tags:
Abu Jinapor
COP26
COP27
Lands Minister