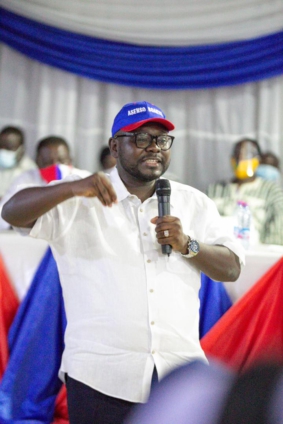 Parliamentary Candidate for the New Patriotic Party in the Bantama constituency has called on the campaign team to convince each voter to support the party.

Francis Asenso-Boakye who is also a deputy Chief of Staff to President Akufo-Addo appealed to members of the campaign team to work in unison to achieve this target.

He was speaking at the inauguration ceremony of the campaign team who will work to ensure the party secures victory in the upcoming December 7 general election.

The party NPP is aiming at garnering a whopping 95% of popular votes in the constituency to ensure that the party wins the presidential election.

The team is co-chaired by the Parliamentary Candidate and the Constituency Chairman.

He urged the team to sensitize the electorates on developmental projects within their surroundings in order to appreciate the effort of government.

“Let’s engage every single voter in our neighbourhood regardless of their party affiliation. We need to maximize our votes here to cancel those from the strongholds of our opponents.

“Let us go and persuade even members of the NDC and I believe they will vote for us based on our track record in government”, he said.

Francis advised the party to work hard to retain power and continue with the many development projects and policies of the government.

Mr Asenso-Boakye also appealed to the party members to offer a helping hand to the campaign team by reaching out to the people and win more souls for the party.

He said, “the campaign is for all of us, and not just members of the campaign committee. We should all play our roles in the various electoral areas and polling stations to ensure victory in 2020.”

He believed that the party has performed creditably well in government and has several achievements under its feet.

“If you go to almost every community in Ghana today, you can pinpoint something significant done by this government, aside from the numerous socio-economic interventions such as free SHS, One District One Factory, NABCO and Planting for Food and Jobs”, he opined.

The Chief Executive of the Kumasi Metropolitan Assembly, Mr Osei Assibey Antwi who was present at the occasion reminded members of the party to approach the coming election with all the seriousness it deserves.

“If the NPP had won the 2008 election, Ghana would have been more developed by now. We must therefore work hard to sustain the gains we have made under this government”, he stated.

A former Member of Parliament for Bantama, Hon Henry Kwabena Kokofu tasked members of the team to discharge their mandate diligently in spearheading the party’s campaign in its foremost “political world bank”.

This he said will vindicate the confidence that had been reposed in them by the party leadership.

DISCLAIMER: The Views, Comments, Opinions, Contributions and Statements made by Readers and Contributors on this platform do not necessarily represent the views or policy of Multimedia Group Limited.
Tags:
Francis Asenso-Boakye
New Patriotic Party