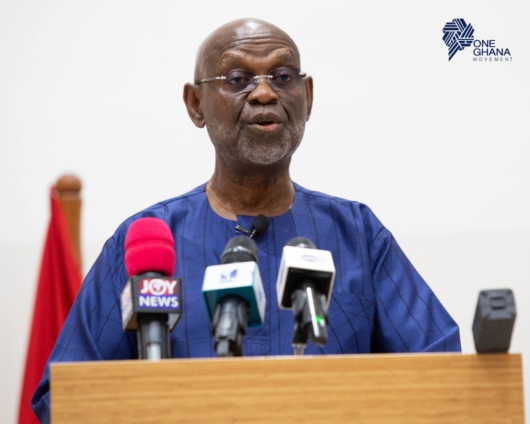 Former Finance Minister, Dr Kwesi Botchway, says government cannot continue asking Ghanaians to make economic sacrifices, while its officials claim and insist that the country “has never had it so good.”

Dr. Botchway, the longest-serving finance minister in Ghana’s history, is credited with leading the country’s economic recovery in the 1980s.

He was delivering a lecture to mark Ghana’s 65th independence anniversary. It was the first Independence Day lecture to be organized by the One Ghana Movement in partnership with the Economics Department of the University of Ghana.

According to him, said there is every indication that Ghana is in some economic distress and steps need to be taken to stop the crisis from worsening into a catastrophe.

“Inflation is back in the double digits and nearing 15 percent. The government is struggling to raise money locally and is accumulating arrears to several programmes – roads, school feeding, LEAP [Livelihood Empowerment Against Poverty]… even salaries,” he said.

“There’s ongoing capital flight and foreign investors have withdrawn close to $200 in January alone. It is not absolutely the end of the world. Not quite. But we are not exactly sitting pretty, and it is not helpful, in these circumstances to be told that we’ve never had it so good.”

At the heart of Ghana’s economic woes, Dr. Botchway said, is “the fact that we are no longer seen as creditworthy, and our policies are not seen as credible in the eyes of the investor community and the credit rating agencies.”

He said any attempt to resolve the problem will necessarily cause some economic hardship and that the managers of the economy need to take measures to ensure that any such hardship is distributed in an equitable manner.

Dr. Botchway pointed out that it might also be necessary to undertake “a thorough review of all the rigidities and sources of pressure in the budget, including every flagship programme, its impact and sustainability.”

He, however, warned against “the lure of solutions that would further mortgage the future of young generations such as collateralizing public revenue streams.”

“Above all, we must resist solutions that would delay ‘hard decisions’ till after 2024, such as issuing zero-coupon bonds ready to mature in 2025,” he said.

“So for example, whoever takes the reins of government in 2025 will have to shell out a whopping $1.25 billion in Eurobond principal payments within a few months of assuming office.  If we do not rebuild the Sinking Fund and if we are unable to regain access to international capital markets to refinance our Eurobonds, then this could mean that the next administration may very well default on its maturing Eurobond obligations in 2025. The national interest demands that we strive to avoid this outcome.”

Dr. Botchway contrasted the current economic challenges with the difficulties the country faced in the late 1970s and early 1980s, pointing out that “we have been here before.”

“The crisis we faced then was unimaginable and infinitely more forbidding,” he said. “But we survived as a nation, which is why some of the discussions we are having on the economy today, leave me rather bemused. I recount it here briefly to say that our current travails can be overcome provided we level with the people, wind down the hubris, the arrogance, and the show of impunity that the people see in some sections of the political elite.”

Dr. Botchway also advised that to resolve the economic difficulties there is need for both fiscal and “political space to enable governments to take the often-difficult decisions that need to be taken without looking over their shoulders.”

To achieve sustainable, long-term economic development, Dr. Botchway said, “we need to decide as a nation, precisely what we wish to do with the Constitutional provisions that enshrine the [National Development Planning Commission] NDPC’s role in our economic planning and development regime.”

This, he said, “will ensure continuity in economic policy-making which has underpinned the experience of all successful developing and developed countries as well as private institutions like Standford University which boasts a 100-year plan.”

DISCLAIMER: The Views, Comments, Opinions, Contributions and Statements made by Readers and Contributors on this platform do not necessarily represent the views or policy of Multimedia Group Limited.
Tags:
Dr Kwesi Botchway
Economic challenges
Government
Independence Day Lecture
One Ghana Movement