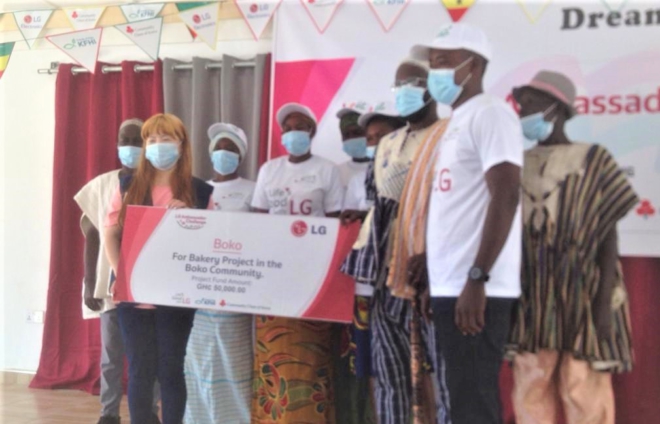 LG Electronics, a South Korean multinational electronics company, has awarded ¢150,000 to three communities in the Upper East and North East regions as grants to implement projects that will empower livelihoods and reduce poverty in the beneficiary communities.

The communities comprise two in the Upper East Region, namely, Boko in the Bongo District and Dagmweo in the Bolgatanga Municipality and Karimenga in the West Mamprusi Municipal Area in the North East Region.

The money was from the LG Ambassador Challenge programme that was organised by the Korean Friends of Hope International, an international non-governmental organisation, and the Community Chest of Korea and was aimed at assisting the communities to undertake projects to solve problems they are facing.

At a ceremony at Bolgatanga to hand over the monetary packages to the beneficiary communities, a representative from LG Electronics Ghana, Mr. Thomas Moore Amoako, said the LG Ambassador Challenge programme was designed to support deprived communities across the country by finding solutions to problems impeding their progress.

He said the company, therefore, established a project that would put communities in competition for financial assistance for projects that would have positive impact on the people.

“The programme is about people sharing ideas on how to solve problems in their communities. LG then goes ahead to select the community with the best idea and offers a support of ¢50,000,” Mr. Amoako added.

The Field Manager for the Korean Friends of Hope International, Mr. Samuel Ofori Manu, explained that the three communities were selected out of 150 proposals received across the country.

He said the selection was done based on the deprived nature of the communities and their capability to resolve the problems they faced.

He said the Boko and Dagmweo communities won the prizes on their proposal to engage in bakery and weaving respectively while the Karimenga community wrote a proposal to undertake a project in ecological farming.

Mr. Manu said the Korean Friends of Hope International and Joyful Africa Mission, also a non-governmental organisation, would monitor the projects to make sure they yielded maximum results and contributed to poverty reduction and achievement of the Sustainable Development Goals (SDGs).

The Assembly Member for Boko Electoral Area, Mr. Michael Baba Awine, expressed his gratitude to LG and the Korean Friends of Hope International for the support.

He said it would go a long way to help establish the bakery project.

He said on completion, the project would open job opportunities for people in the community, put money in people’s pockets and help reduce the extreme poverty from the area.

The Chief of Karimenga, Naba Saybeam Emmanuel Baam, said the community relied on a dam constructed by the inhabitants, which women in the community had over the years used for farming in the dry season.

He said the support would enable the community to expand a greenhouse project it had undertaken in the area to facilitate all year farming.

DISCLAIMER: The Views, Comments, Opinions, Contributions and Statements made by Readers and Contributors on this platform do not necessarily represent the views or policy of Multimedia Group Limited.
Tags:
LG Electronics
North East Region
Upper East Region