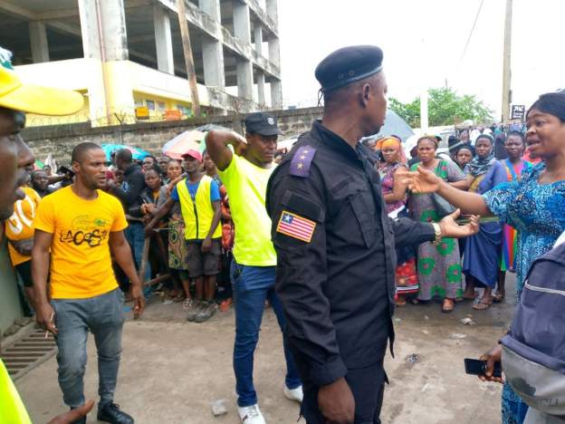 People are desperate to get rice in the capital, Monrovia

Liberia is grappling with a shortage of rice, causing panic-buying and anxiety.

The country’s staple started disappearing from shops and marketplaces several weeks ago, prompting hundreds of desperate rice retailers and consumers in the capital, Monrovia, to spend days and nights in queues to scoop small quantities of the commodity from the warehouse of a foreign company that still has a small consignment.

Some of them have gone on to profiteer, reselling the commodity at skyrocketing prices.

Police have been deployed to assist the company’s security, as crowds of anxious people try to force their way into its premises.

As the crisis continues, large-scale buyers say they are being compelled by the company to also buy unrelated goods they do not need.

The shortage seems the worst in recent years and the tales of the visibly frustrated buyers in queues are similar.

Many told the BBC they had spent days sleeping around the company’s premises and had had their money stolen by thieves infiltrating the crowd.

Some people have fainted while others sustained injuries in a stampede to the warehouse.

A spokesman for the company, Fouani Brothers Corporation, said a worse shortage was on the horizon.

James Doe Gibson told the BBC its current stock would “last for about two weeks”.

President George Weah has said he does not believe that there is a rice shortage as importers had told him they had rice to last up to next year.

But he said he would look into the matter, urging people not to “listen to the noise in the streets”.

DISCLAIMER: The Views, Comments, Opinions, Contributions and Statements made by Readers and Contributors on this platform do not necessarily represent the views or policy of Multimedia Group Limited.
Tags:
Liberia
Rice shortage