It is not clear whether the gunmen are still inside the hotel, and whether any civilians are trapped there.

A Twitter account linked to Islamic State (IS) said it had attacked the hotel. The claim could not be verified.

A civilian who witnessed the attack told the BBC: "I suddenly heard shots and saw people running towards me, and we all escaped from the back [of the hotel] through the underground garage. The hotel did a lockdown after that."

A security source told the BBC that one gunman had been arrested, and that another two assailants were still inside the hotel. 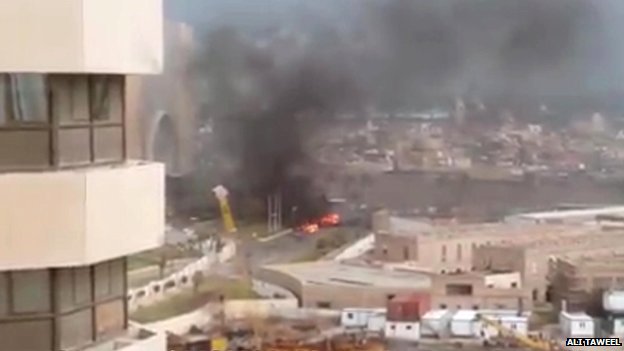 The surrounding has been sealed off, the BBC's Rana Jawad in Tripoli reports.

One hotel employee told the Associated Press news agency that the hotel was mostly empty at the time of the attack.

Meanwhile, a hotel security source told the BBC that the hotel had received a threat "a few days ago" warning managers "to empty the building".

Libya has been hit by instability since the overthrow of long-time ruler Col Muammar Gaddafi in October 2011.