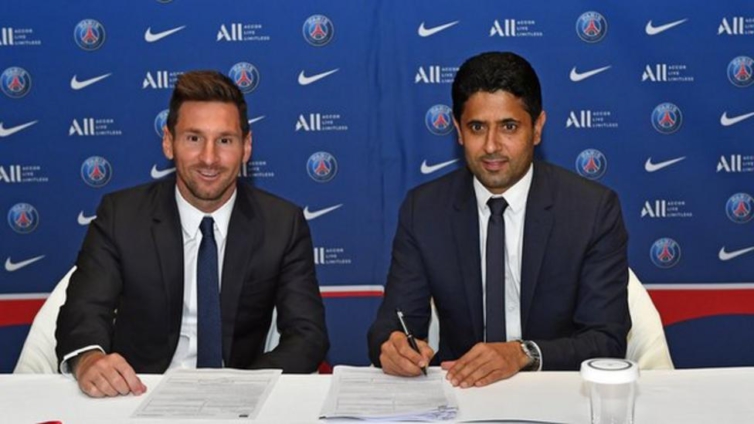 Lionel Messi has signed a two-year contract with Paris St-Germain after leaving Barcelona.

The 34-year-old’s deal also has the option of a third year.

Messi left Barca – the only club he has played for – as they were unable to afford a new deal under La Liga’s financial fair play rules.

“I am impatient to start a new chapter of my career in Paris. The club and its vision are in perfect harmony with my ambitions,” said the Argentina star.

“I know how talented the players and staff are here. I am determined to build, alongside them, something great for the club and for the fans. I can’t wait to set foot on the Parc des Princes pitch.”

PSG president Nasser al-Khelaifi said: “I am delighted that Lionel Messi has chosen to join Paris St-Germain and we are proud to welcome him to Paris, with his family.

“He did not hide his desire to continue to evolve at the highest level and to win trophies. The ambition of the club is of course identical.

“The addition of Leo to our world-class team confirms the relevance and success of our recruitment. Together with our great coach and his staff, I look forward to seeing our team make history for all of our supporters around the world.”

Considered one of the greatest players of all time, Messi scored a record 672 goals in 778 games for Barca, the club he joined as a 13-year-old.

The striker has won the Ballon d’Or a record six times and lifted 35 trophies with the Catalan club.

Messi, who will wear the number 30 shirt, will play in a front three alongside the two most expensive players of all time – Neymar and Kylian Mbappe.

A PSG news conference will take place in the auditorium of the Parc des Princes on Wednesday at 10:00 BST.

Messi could make his PSG debut at home to Strasbourg on Saturday.

Why did Messi leave Barca?

Keeping Messi at the Nou Camp had been president Joan Laporta’s top priority this summer, but attempts to agree a new contract were severely complicated by the club’s financial problems.

He officially became a free agent when his previous deal expired on 1 July, but it was still widely anticipated he would stay.

However, Barcelona confirmed last week that Messi would be leaving the club because of “financial and structural obstacles”.

On Sunday he broke down in tears at a news conference in which he admitted he did not want to leave Barcelona, but had no choice.

Messi had agreed a new deal – on 50% of his old wages – to stay at Barcelona but the club could not afford to implement it because they were so far above the wage limit allowed by La Liga.

The news sparked a scramble for his services, with Manchester City and Chelsea among those to be linked, but it is PSG who have won the race to secure the Argentine superstar’s signature, seen as one of the most noteworthy captures in football’s history.

Is Messi the key to the Champions League?

PSG are yet to win the Champions League in a decade of Qatari ownership and subsequent heavy investment, with the 2020 final defeat against Bayern Munich the closest they have come.

“Clearly what PSG’s ownership want is a team that is in the Champions League final every year,” said Balague.

“With Messi you have an advantage. Mauricio Pochettino being in charge and his contract being renewed as well means they have an idea how to do that, and Messi will complement that.

“They will win the league, that’s almost a given now, even though they lost last season. It will be a less competitive league which means he will be fresh of course, or should be, for the Champions League campaign.”