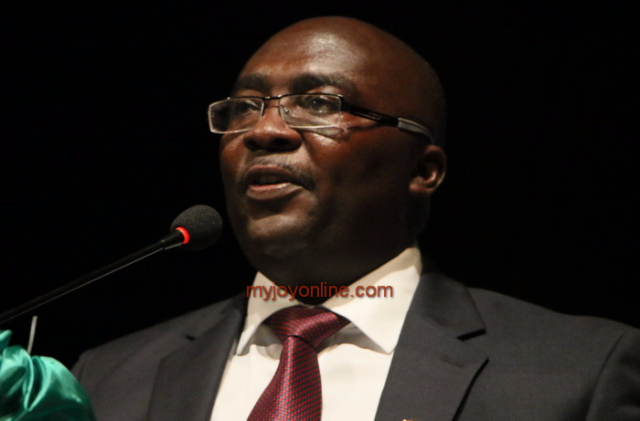 Vice Presidential Candidate of the New Patriotic Party, Dr Mahamudu Bawumia, is to delivering a lecture on the Ghanaian economy.

The programme which is taking place at the National Theatre would see the economist make a diagnosis of the challenges in the economy and proffer possible solutions.

The lecture would be chaired by former President John Agyekum Kufuor under the theme “The State of the Ghana Economy – A Foundation of Concrete or Straw.”

John Mahama said to whom much is given much is expected. Borrowing from that the performance of government in the last eight years

-He measures the dollar alongside the cedi and said there was a lot of revenue at the disposal of the Mahama administration from 2009-2016.

-In the real sector, the Gross Domestic Product has seen a decline

-Data shows National Income increasing under Kufour and people were happy as those at the bottom of the income scale had a life unlike during the Mill-Mahama administration. Worst decline was the tenure of Mahama as president.

-Ghana made in terms of Human Development index was 1.33 which has now fallen to 1.13 during the Mahama administration

– Taxes on business has increased in a bid for the government to make up for their reckless spending.

– Government cutting and abolishing all forms of allowances such as research allowances, teacher training allowance etc

– Accumulating arrears to contractors and others

-Ghanaian experience is exact opposite of fiscal consolidation

-Fiscal data of 2015 is yet to be reconciled meaning asking what is complicated about it. The fiscal data that the government presented showed an opposite picture.

– Arrears accumulation about rising nonperforming loans due to debt to be paid to public institution like ECG, VRA

– 66 percent of Ghana's debt from independence has been accumulated by John Mahama in the last three years.

– $39 billion borrowed by government so far

– $42 billion would have been borrowed by December but government will claim a book value is $26 million as they will be applying the current exchange rate and not at the time the money was borrowed.

– The entire allocation to the ministry of roads, food agriculture and all the six ministries was only GH¢2.1 billion 2016 as compared to GH¢10.5 billion cedis interest payment on debts paid by government.

– Generation shortfalls in the power and energy sector due to corrupt management, unstainable debt,

– Akosombo over drafted and can't support the pressure on it anymore

– All plants are performing below capacity

– Public institutions indebted to banks, which will require management to forestall explosion

– Microfinance not being monitored or regulated