Liverpool 2-1 Newcastle: Carvalho and Elliott are signposts to the future 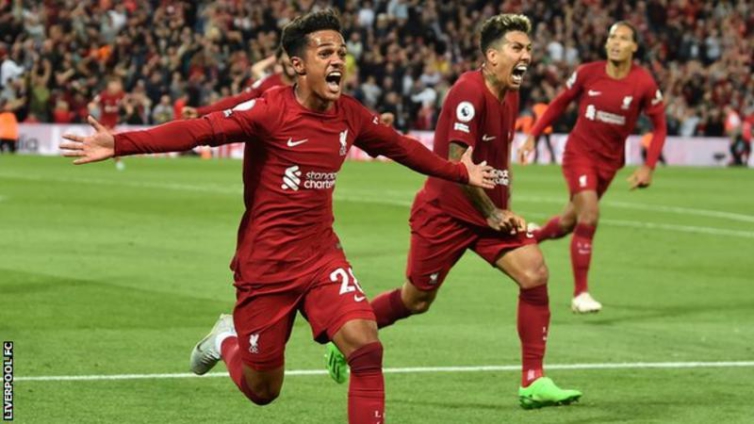 Fabio Carvalho claimed the headlines and the adulation as he was swamped by team-mates in a corner of Anfield Road after giving Liverpool the latest of late victories against Newcastle United.

Carvalho, the summer signing from Fulham who celebrated his 20th birthday on Tuesday, has become an instant Liverpool wildcard in a start to the Premier League campaign that has not reached the heights that brought them to within touching distance of four trophies last season.

He has made an impact every time he has figured this season, but nothing as dramatic as when he emerged from a crowd scene in the 98th minute to pounce on Newcastle’s failure to clear a corner and complete Liverpool’s comeback from behind to win 2-1.

It led to wild scenes on the pitch, in the Anfield stands and in the technical area where the angst which had been building all night, with Liverpool manager Jurgen Klopp in a state of almost permanent fury, boiled over.

Carvalho was the hero and the reaction illustrated the mixture of relief and celebration around Anfield, a release of the pressure travelling down the M62 from Manchester City, where news of their 6-0 thrashing of Nottingham Forest had filtered through, offering up the prospect of Liverpool being seven points behind the Premier League champions and nine behind leaders Arsenal if they did not win.

It all came together as Carvalho scored via the bar at the end of a superb cameo, leaving an increasingly mature and impressive Newcastle United devastated.

Much attention is paid to Liverpool’s cast of world-class superstars, led by figures such as Mohamed Salah and Virgil van Dijk, but two young acquisitions from Fulham are providing the signposts to the future.

Carvalho, of course, is one but even more impressive was 19-year-old Harvey Elliott, who rose to the challenge of overcoming Newcastle United as they defended the 38th-minute lead given to them by new £60m striker Alexander Isak.

Anfield’s frustration – not helped by what they regarded as blatant time-wasting tactics by Newcastle – was building and even the normally peerless Van Dijk felt the rough edge of the tongues of Liverpool’s supporters following a second long, lazy and aimless pass in swift succession in the second half.

None of this touched Elliott, who was comfortably Liverpool’s stand-out performer as he covered the ground with ease, demanded the ball, probed relentlessly and never once shrunk against the challenge presented by Newcastle.

Elliott’s progress was cut short by a serious injury sustained at Leeds United last season but it is clear manager Klopp has total faith in the former Fulham product, who is quickly making himself a fixture in a Liverpool midfield that is still failing to fire this season.

Liverpool scrambled over the line in what was a largely unimpressive performance but it will give Klopp – fist-pumping in front of the Kop only five games into the new Premier League season – huge satisfaction that it was his young brigade who pulled him team to victory.

As for Newcastle United, the disappointment will have been bitter having looked such a good bet for at least a draw until that late twist in the tale.

Manager Eddie Howe, who quietly made notes as Klopp raged in the direction of the Newcastle bench in the first half, will be devastated at the conclusion but satisfied with what went before as an indicator of their improvement.

And, to their credit, it was done without key injured trio Allan Saint-Maximin, Bruno Guimaraes and Callum Wilson, three players of great importance.

All eyes were on debutant Isak and he did not disappoint with an impressive performance, marked by an emphatic finish of total confidence to give Newcastle the lead, when the 22-year-old signed from Real Sociedad thumped a drive high past Alisson after being played in by Sean Longstaff.

Isak looks like a forward who could give Newcastle an extra dimension with his willingness to do the dirty work as well as offer pace and a very obvious eye for goal.

Newcastle may have got right up Anfield’s noses with their delaying tactics but their overall effort contributed to that frustration and they looked like a team on the right track.

In the end, they were only denied by two outstanding young Liverpool talents who showed Klopp can count on the exuberance and style of youth beyond his established stars.

DISCLAIMER: The Views, Comments, Opinions, Contributions and Statements made by Readers and Contributors on this platform do not necessarily represent the views or policy of Multimedia Group Limited.
Tags:
EPL