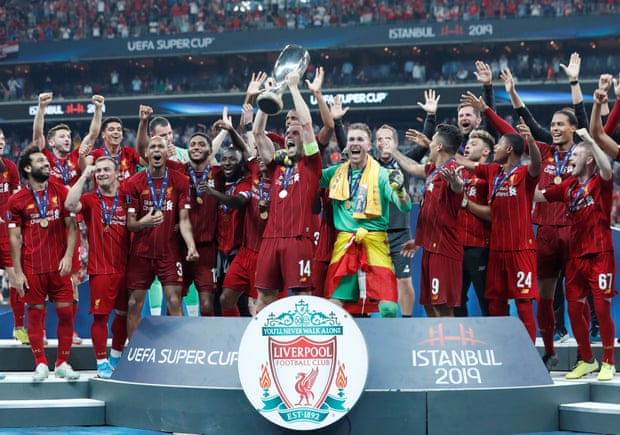 Adrian was the shoot-out hero as Liverpool beat Chelsea 5-4 on penalties to lift the UEFA Super Cup for the fourth time in their history following an entertaining final that ended 2-2 after extra time in Istanbul.

The former West Ham keeper marked his full competitive debut for the Reds with a decisive save to deny Tammy Abraham after the first nine spot-kicks were all converted.

Jurgen Klopp’s Champions League winners were second best for much of the first half and deservedly went in at the break trailing to Olivier Giroud’s well-taken strike.

The Reds responded by bringing Roberto Firmino off the bench from the restart and the Brazilian forward made an instant impact, teeing up Sadio Mane for a simple tap-in three minutes later.

Liverpool looked a completely different proposition with their front three back in tandem and they moved ahead five minutes into extra time. Once again Firmino turned provided for Mane to flash a stunning strike into the top corner.

However, Chelsea hit back soon after as Adrian was controversially penalised for bringing down Abraham. Jorginho stepped up to level and send the match to a shoot-out.

Next up, Liverpool visit Southampton in the Premier League on Saturday while Chelsea will hope to pick up their first competitive win under Lampard at home to Leicester on Sunday afternoon.