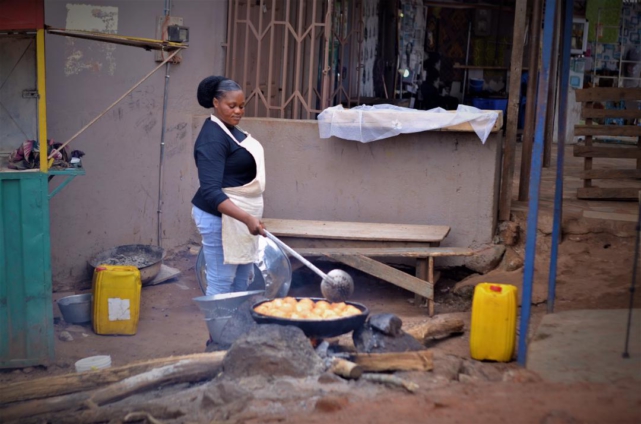 After graduating with a first class and completing her national service as a teaching assistant at a university, Priscilla Akwagu had to return to her hometown to continue a vocation that put her through school- hawking buff loaf.

Priscilla is a single mother of two who believes her entrepreneurial venture allows her to survive Ghana’s unemployment situation.

Some refer to them as the brown mouth-watering balls of Asante Mampong, but they are known locally as ‘bofrot’, a corrupted word of buff loaf or in some parts of the country, ‘togbɛɛ’.

This is not just a mere favourite accompaniment to most Ghanaian breakfast meals, but a life changer.

This is a business she took over from her mother to settle their debt, after life in the city became unbearable.

“I lived with my brother in Kumasi. My mum was somewhere. So I started hawking in Kumasi. I used to sell sugarcane and worked at a chop bar. Sometimes, the left over is what my brother and I take for support. I used to wash the utensils and do the cleaning at the chop bar.

“My mum used to sell the ‘bofrot’ and she had debts to settle. So, I thought it was wise to come and take over from her and clear the debts. The business was lucrative and that helped me settle her debts,” she said.

At a young age of 17, Priscilla became pregnant with her first daughter.

But as a young mother who believed in education, she defied the odds and began her secondary education at the age of 21.

“I completed JHS in 2007. I got pregnant with my first daughter after school. I was 17 years at the time. So after I delivered, I needed to take care of her. So in 2012, when she was three, I decided to go back to school. I didn’t know what school to attend because I had a child.

“So, I went to Atebubu and spoke to a man who led me to the headmistress for admission. She was reluctant because girls like me always ended up getting pregnant again. But later, she agreed and admitted me into the school. I just didn’t know how to plan for school and work,” she said.

Her resilience and tenacity to survive never flickered.

Priscilla continued with her education to the university pursuing a degree in Ghanaian Language.

With entrepreneurship as her watchword, she jostled her academics with her hawking business to finance her education.

“My campus was very far from here. It was in the Central Region, Ajumako. A colleague of mine takes over the business when I am not around. I come back home twice to sell.

“If I am to return to campus, I will sell and join the night bus. I’ll be tired when I get to school so I don’t even go for class for about two weeks until I gain strength,” she said.

Known popularly in Asante Mampong as Ama Doughnut, she has been about the hawking business over a decade.

A vocation that put her through school right from her secondary through to tertiary education.

The tussle of complementing schooling with business never hindered her from graduating with a First Class in Languages.

Having served as a teaching assistant at her department for her national service, she is back on the streets.

Priscilla had preferred to teach but some alleged illegalities involved in securing a teaching job pushed her away.

“I love to teach. When I was returning from my national service. I told myself I’d go to any nearby school and teach for free. People are taking money before they get a place to be fixed in GES.

“After you sat down to write your licensure and before you get to GES you have to pay close to GH¢10,000 while I can use this money to finance my business and get more. When am I going to settle this debt if I am receiving GH¢2,000?” she wondered.

Business, she says, was good in times past. But, the ballooning prices of flour and vegetable oil, essential ingredients for the business, are biting hard now.

“Flour was GH¢24, but when I returned it’s now GH¢500. These don’t even last for two weeks. I have to now buy them on credit and pay them later. The children are not even buying them nowadays. They say it’s expensive,” she said.

Despite these challenges, she plans on expanding her business. However, finding a workforce for the business is daunting.

“The business needs some branding and more people to join. If I try getting girls to support me they don’t want to because they belittle the hawking business. Many of the youth are shy about selling,” she indicated.

For Priscilla, she will continue to give it all so long as she earns her daily bread from the business.

“I took a picture of myself in my hawking apparel and carrying my container, a friend of mine told me to pull the picture down. But I resisted and told him this is what I do to survive and I am not shy about my business.”

DISCLAIMER: The Views, Comments, Opinions, Contributions and Statements made by Readers and Contributors on this platform do not necessarily represent the views or policy of Multimedia Group Limited.
Tags:
Buff loaf
Kumasi
Living Standard Series
Priscilla Akwagu
UEW