London Court throws out AG, others for sleeping on $170m case 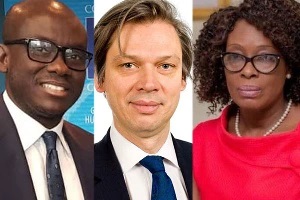 The Commercial Court in London, has refused to allow Ghana to bring a belated challenge to an UNCITRAL award worth over US$134 million in favour of a power contractor, ruling that national elections and COVID-19 pandemic, did not make the state’s delay reasonable.

The case started under Gloria Afua Akuffo, when she was the Minister of Justice with Godfred Yeboah Dame as her Deputy.

State attorneys, including Helen Akpene Awo Ziwu, Anna Pearl Akiwumi Siriboe and Grace Oppong Dolphy in Accra, were also mentioned in the case as having failed to beat a 28-day deadline.

However, the State Attorneys together with Godfred Yeboah Dame, who took over from Gloria Afua Akuffo, went sleeping on the job, leading to a delay in contesting the judgment debt.

The result of that deep sleep is that, the poverty-stricken Ghana, will be paying a whopping US$170 million in damages to the claimants; Ghana Power Generation Company (GPGC) located at 1 Airport Square Building, 7TH Floor, Accra.

Godfred Dame and his subordinates’ attempts to hide behind the 2020 general election and the COVID-19 pandemic as excuses for the delay, was rebuffed by the London court.

In a ruling on Wednesday June 8, Mr Justice Butcher, refused to grant the government a time extension to apply to set aside the award – adding that the state’s grounds for challenging it were “intrinsically weak”.

Global Arbitration Review previously reported on the award in favour of GPGC against Ghana.

GPGC was represented before the court by Charles Kimmins QC and Mark Tushingham, where Ghana was said to have been too late to challenge the decision against it.

In the arbitration, GPGC, used Three Crowns and Ghanaian firm, Kimathi & Partners, along with damages experts from FTI Consulting.

Ghana also had representation from the attorney general’s office and Amofa & Partners in Accra.

The underlying dispute concerned the government’s alleged wrongful repudiation in 2018 of a contract for a “fast-track power generation solution” – involving the relocation of two aero derivative gas turbine power plants to the government’s territory.

It also dismissed the government’s counterclaim.

The award is said to be worth around US$170 million. Under English law, the government had 28 days to bring a challenge to the award.

Three days before the expiry of that deadline, the government’s then solicitors, Omnia Strategy applied to the court for a 56-day extension.

Omnia, said it had only just been instructed and that bureaucratic processes had been delayed because of national elections in the country and because key members of the attorney general’s office, had contracted covid-19.

The court agreed to extend the deadline for any challenge to March 8, but the government only brought its set-aside application on April 1, now represented by Volterra Fietta.

The law firm explained that, the new attorney general, had only been sworn in on March 5, and the firm had been instructed 10 days later.

In the latest ruling, Butcher J, said the government’s delay was “significant and substantial”, as its request for a second extension had come 38 days after the statutory deadline and 27 days after the first extension expired.

The fact that a large sum was at stake in the arbitration was not a reason for the challenge taking longer to make. The fact that the attorney general, had not been sworn in until March 5, did not mean the government was unable to act in the meantime, the judge said.

The government, had still managed to instruct Omnia during this June 12, 2021, 10:37 Pagina 2 di 5period and the new AG, who was previously deputy attorney general, had been among the counsel in the arbitration.

Echoing a ruling in the P&ID v Nigeria case, the judge said the fact that a party is a foreign state is a matter of “little significance” when it comes to compliance with court directions.

That an entity may have “bureaucratic decision-making processes” does not justify delay.

As for arguments about covid-19, the judge said the evidence as to the way in which the pandemic had affected the government was “wholly inadequate”.

There needed to be a detailed explanation of how it had affected “particular people or particular processes”. The judge also said that the grounds of the government’s proposed challenge to the award were “intrinsically weak”.

One argument that the tribunal failed to be “guided by the terms and conditions” of the contract was a “clear case of an attempt to present alleged errors of law as errors of procedure”.

DISCLAIMER: The Views, Comments, Opinions, Contributions and Statements made by Readers and Contributors on this platform do not necessarily represent the views or policy of Multimedia Group Limited.
Tags:
Gloria Afua Akuffo
Godfred Yeboah Dame
London Court
Mr Justice Butcher