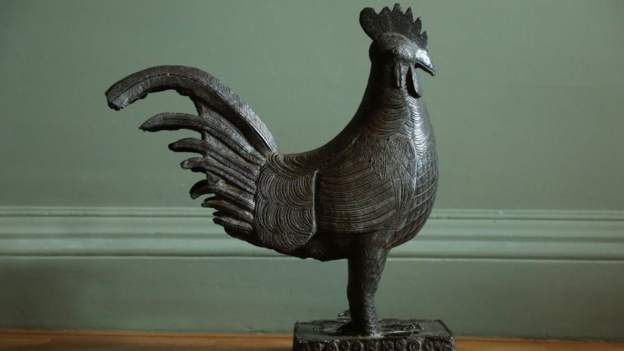 The Benin bronze, known as an "okukor", was given to Jesus College in 1905.

Cambridge University will on Wednesday become the first British institution to return a Benin Bronze to the Nigerian authorities.

Jesus College will hand over a statue of a cockerel to a delegation from Nigeria, in a ceremony that will take place at the college.

It follows decades of campaigning by activists for the bronze statue to be returned home.

The cockerel is one of thousands of priceless artefacts taken by British soldiers from the palace of the then ruler of the Kingdom of Benin.

The loot happened during a punitive expedition by the British military in 1897, which resulted in the ancient City of Benin being razed to the ground.

This marked the end of the Kingdom of Benin, then one of the most powerful in Africa.

The artefacts were then sold and gifted to individuals, as well as museums around the world.

On Thursday Aberdeen University will also be returning one of its Bronzes.

Nigerian authorities and activists have long called for their repatriation, arguing that they are part of their cultural heritage.

They hope these returns will mark the beginning of a larger scale repatriation of the Bronzes to Nigeria, which plans to build a museum to house them.