Madagascar palms ‘are dying out’ 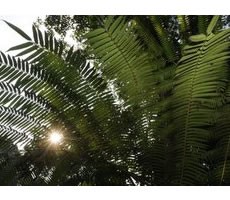 A majority of Madagascar’s palms face extinction due to land clearing, an environment protection group says.

The International Union for Conservation of Nature (IUCN) said 83% of the 192 tree varieties had been added to its threatened species list.

The findings bring the global number of species at risk of dying out to 20,219.

The IUCN’s global director for biodiversity conservation, Jane Smart, said the latest study showed the situation could no longer be ignored.

“The figures on Madagascar’s palms are truly terrifying, especially as the loss of palms impacts both the unique biodiversity of the island and its people,” she said.
Domino effect

Madagascar is the world’s fourth biggest island after Greenland, New Guinea and Borneo.

Because of its isolation most of its mammals, half its birds, and most of its plants exist nowhere else on Earth.

Palm trees represent an integral part of the island’s biodiversity, with many of its poorest communities relying on the trees to provide housing and food.

The raw materials are used to build houses, utensils and crafts, as well as to produce food, drinks and medicine.

But forests have been rapidly shrinking as land is being cleared for agriculture and logging.

“The majority of Madagascar’s palms grow in the island’s eastern rain forests, which have already been reduced to less than one quarter of their original size and which continue to disappear,” the IUCN’s Dr William Baker said.

Animals like the lemur have fallen victim to the domino effect of deforestation, which destroys essential habitat.

“The high extinction risk faced by Madagascar’s palms reflects the decline in these forests, which threatens all of the remarkable wildlife that occurs there,” Dr Baker said.

The worldwide number of animals and plants on the IUCN’s Red List of Threatened Species is now 65,518.