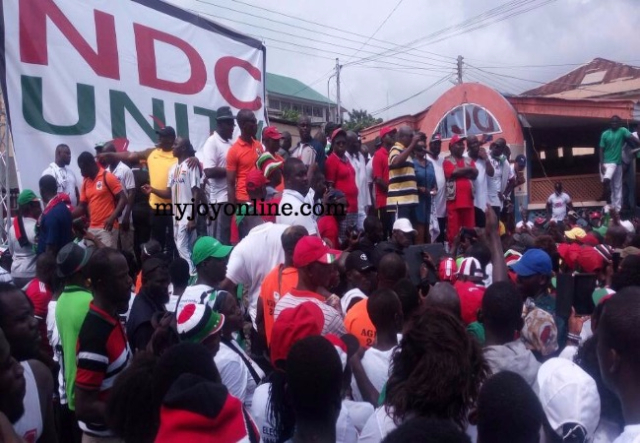 Former President Mahama has confirmed Joy News reports that a number of reforms being carried out by the NDC are part of initiatives to implement recommendations made by the Prof Kwesi Botchwey Committee.

The former President has indicated the recommendations are already being instituted.

He was speaking at the third unity walk of the party in Cape Coast after similar campaigns in Tamale in the Northern Region and the capital, Accra.

The Committee was tasked to establish reasons the National Democratic Congress (NDC) lost the 2016 elections by going around the country to interview rank and file of the party.

Joy News brought you details of intercepted report that recommended among other things the scrapping of the current biometric voter’s register of the party and the need to hold unity walks and healing campaigns among others.

According to the former President, the party will kick start the implementation of the recommendations with branch registration of members this month.

He entreated every member to go to their respective branches to register and not go to the regional headquarters.

The Member of Parliament for Tamale Central, Inusah Fuseini had said on Joy FM/MultiTv's Newsfile programme that he has no doubt that the governing New Patriotic Party (NPP) was behind the document circulating in the media as the Kwesi Botchwey Committee report.

Describing the contents of the executive summary of the report as fake, he said it was impossible for the Prof. Kwesi Botchwey Committee to produce the things are being cited as having been written in the report.

But Editor-in-chief of the New Crusading Guide newspaper, Abdul Malik Kweku Baako, dismissed claims by top members of the NDC who said the leaked portions of the Prof Kwesi Botchwey Committee report serialised by Joy FM was fake.

Mr Baako who claims to have pictorial copies of the report, which was sent to him by a member of the NDC, said he compared those portions to what is being circulated in the media and it is exact.

Therefore, the NDC cannot say that the leaked report – an executive summary of the entire report – is fake.

Former President Mahama also took a dig at the Akufo-Addo government, saying the NPP rode on lies and propaganda to capture political power.

Using the recent gaffe of embattled Commissioner to South Africa, George Ayisi Boateng, who said he will priotise needs of New Patriotic Party (NPP) members at his duty post.

Mr Mahama said he remembers vividly how President Akufo-Addo promised to be father for all after assuming office but has lied when it comes to treating all Ghanaians equally.

According to him, the new digital addressing system, GhanaPost GPS, is a huge scandal that needs President Akufo-Addo to set up a committee to investigate the absymal job done in that record.