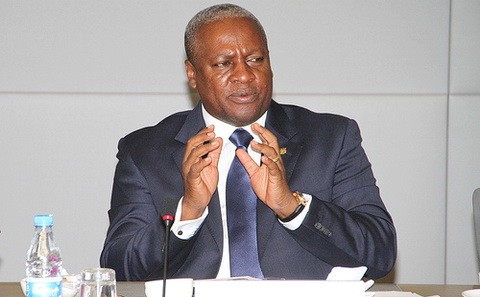 He said Ghana still lived by its accolade as the Gold Coast but the mining sector faced a few challenges, such as illegal mining, which resulted in the deportation of about 4,700 illegal miners recently.

The Responsible Mineral Development Initiative is aimed at helping countries to develop their mineral resources in a socially and economically responsible manner.

President Mahama stated that unlike the big mining companies whose operations could be monitored and regulated by state agencies, the opposite was the situation with illegal mining operators.

In that respect, he gave an assurance that the government was determined to adopt measures to keep illegal miners at bay.

He told the opening | session, attended by the Liberian President, Mrs Ellen Johnson-Sirleaf, and the Guinean President, Alpha Conde, that apart from a number of legislation passed to inject sanity into the sector, there was the need for technical expertise to manage the system.

While admitting that the nation faced challenges in the mining industry, President Mahama, nonetheless, indicated that they were surmountable As a result, he said, action was being taken to address some of the shortfalls to ensure a win-win-situation for the country and its partners in the sector.

The President noted that over-reliance on primary production had, over the years, denied the country the expected benefits from mining.

To arrest the problem, he said, Ghana was seeking international cooperation to move its mining sector from a primary processor of mineral resources to a secondary one.

Africa's population, the President stated, was growing fast, saying if jobs were to be created for its people, then emphasis should be placed on secondary production on minerals.

He told the conference that although Ghana had entered into sustainability agreements with the big mining companies operating in the country, the implementation of the agreements had faced some challenges.

For instance, he said, while the government had introduced the windfall tax to ensure that Ghana also reaped benefits when gold prices went up on the international market, the companies opposed the implementation of the tax.

The President said the tax had to be shelved following concerns by the companies that the tax could lead to a cut in jobs. *

He gave an assurance that nothing would be left to chance to ensure that responsible mining reigned in Ghana.