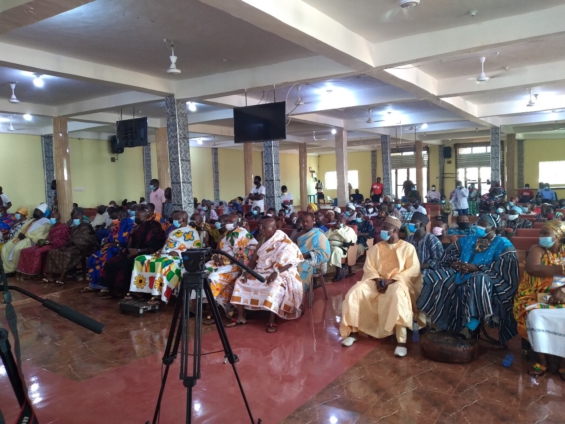 The National Democratic Congress (NDC) flagbearer for the 2020 election, John Dramani Mahama, on Tuesday paid a one-day visit to the Bono East Region as part of his post-election nationwide thank-you tour.

The former President paid separate courtesy calls on the members of the Bono East Regional House of Chiefs and the Catholic Bishop of Techiman Diocese, Most Reverend Dominic Yeboah Nyarko at Techiman to thank them and residents of the region for their support during the election.

Mr Mahama later met the regional executives, members, and supporters of the NDC and urged them to remain resolute in their continuous support of the Party towards victory in the Election 2024.

He said, the NDC would no longer depend on the Supreme Court to determine its victory or otherwise in subsequent elections but would work harder to win at the polling stations and the collation centres.

Mr Mahama expressed concern about the security situation in the country and therefore stressed the need for government to resource the security agencies with the needed and adequate logistics such as bullet-proof vehicles, sophisticated weapons, and modern communication gadgets and equipment to enable them to meet the task of protecting lives and properties in the country.

All things being equal, the former President would visit the Bono Region on Wednesday, September 8, according to his schedule.